The Messaging is The Medium: survey results are in

IBM is down, but not out

Reg Tech Panel Messaging is a thread that runs through IT from top to bottom, from humans exchanging information with each other, down to software and even hardware exchanging status messages and information packets. This report, which is based on feedback from readers of The Register provided during our last annual Barometer Survey, concentrates on asynchronous information exchanges where at least one human is involved. This enables us to rule out synchronous activities such as IP telephony and videoconferencing and the more technical message exchanges which are hidden from human view.

The survey itself looked at messaging in a number of guises, primarily as a platform but also in the context of mobility, collaboration and Web 2.0. These nuances are less important than the underlying story which is that of large software vendors such as IBM and Microsoft holding substantial sway over the present and future messaging habits of their customers and prospects. Waiting in the wings, of course, are companies like Google and Yahoo! and various other bit-part players who would like their own slice of the action.

The research examined preferences and activities by organisation size: corporate (over 5,000 employees); mid-market (250-5,000 employees) and SMB (up to 249 employees). Each segment has its characteristics but while the corporate and mid-market are closely aligned, the SMB sector marches to a slightly different drummer.

The survey asked respondents what email and messaging platforms they were using and how committed they were to them. Among corporates, the story is pretty clear; Microsoft is the platform of choice for over eighty pe rcent of respondents while a large proportion of Lotus Notes/Domino customers regard their own choice as a legacy system. (see Figure 1). 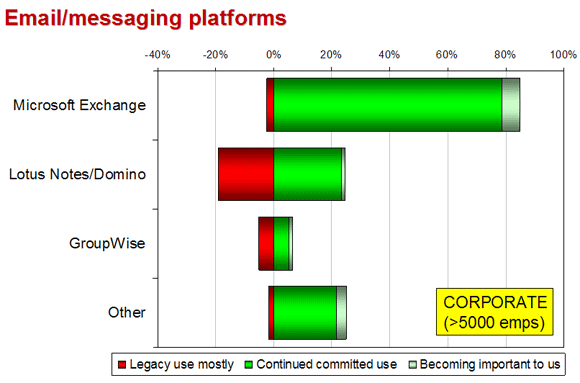 Figure 1: The relative importance of various email/messaging platforms to corporates

Despite attempts to refresh the Lotus brand with a combination of new Notes and Domino releases as well as a plethora of related products such as Sametime, Quickr, Connections and Symphony, it looks as if the ‘legacy’ tag is still hanging round IBM’s neck like a millstone. Compared with Microsoft, it also happens to score very low on the ‘becoming important to us’ rating as, indeed, do GroupWise and ‘other’. It’s dangerous to draw conclusions from such slight signals, but the signs at the moment bode ill for anyone other than Microsoft.

Perhaps its decision to persist with names like Lotus, Notes and, more recently, Symphony diminishes the perception of IBM/Lotus as a forward-looking organisation. Yet it is doing a good job of integrating social tools, unified communications capabilities and developer tools in order to help put its platform at the heart of the user experience.

In fact, one could reasonably argue that IBM is ahead of the game in this respect. Products like Lotus Connections (for social networking) and Quickr (for teamwork) are well thought out and can coexist with Microsoft platform products such as Exchange and Active Directory. However, prospective buyers will need clear explanations of the specific advantages that the IBM/Lotus products bring over Microsoft’s. Both are worth looking at closely and a decision made based on your actual needs.

The responses to the survey from mid-market companies were very similar to the corporate responses. But, among SMBs, the ‘other’ category garners a greater share of the vote, with 'committed use' and 'becoming important' taking it to a forty per cent slice. Lotus Notes/Domino and GroupWise are almost ‘no shows’ at this level of the market. (Figure 2)

In IBM’s case, its showing is poor because its attention has always been in the higher reaches of the market. Until its recent Foundations and LotusLive announcements, it didn’t really make much effort at this level. It will have to rely on third parties to reach out for business but, as yet, its strategy for providing ‘air cover’ for its vendors and penetrating the SMB world is still unclear. 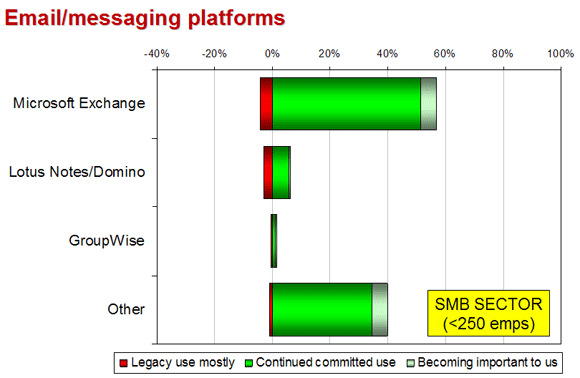 Microsoft Exchange, at 57 per cent is still in the lead but, among SMBs, it's clearly far from the 'de facto' choice. This could be for a number of reasons, but the most likely is that a high percentage are not really ‘platform aware’ in the same way that larger organisations are. Only 56 percent claimed to be using an email/messaging platform. Many of the remainder will have their email and their web presence hosted by their ISP and they are unlikely to be aware of the underpinning architecture.

Within the ‘Other’ responses, the most frequently cited platform is Google Mail at 14 pe rcent of this group, with Postfix close behind at 12 per cent, followed by Yahoo!’s Zimbra at six per cent. We should make clear that this survey naturally attracts a technically savvy audience and, therefore, their observations in the ‘other’ category may not reflect the average SMB.

However, the Google and Yahoo! figures suggest that smaller organisations are increasingly willing to move to hosted solutions, which is good news for both IBM and Microsoft and their recently-announced ‘Live’-branded SaaS offerings. They are not too late for a market which is just waking up to the potential. And each vendor has a trusted reputation among prospects and customers. We can expect to see each making inroads with their LotusLive and Windows Live hosted offerings, although Microsoft definitely has the edge in terms of branding with regard to the SMB audience. IBM will need to invest heavily to raise its profile here.

The findings here are based on an online research study conducted via The Register science and technology website (www.theregister.com) in October 2008, which garnered 1125 responses. As a result of the online nature of this study, the respondents will have been self-selecting, and drawn from a technology-literate group. We are also conscious that the current financial climate may cause some variability in responses that might be influenced by ongoing economics. As the study covered a broad range of areas and did not particularly dwell on financial aspects we do not believe there will have been any significant skew towards one technology area or another; nor do we believe there will have been too much variability due to economic criteria in this case.