No telly in your office? No problem, because the BBC has launched a live TV service for smartphones. 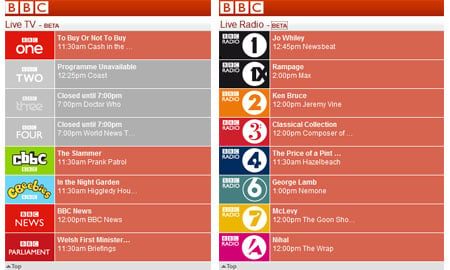 Although still in beta, the Live TV service is designed to let you watch a selection of TV channels, including One, Two and BBC News, live over a Wi-Fi connection. It also supports several radio stations, including Radio 1, 2 and 4.

There’s no need to install any applications prior to watching to any of the channels, just “click and go”, the BBC said.

Currently the service only works over a Wi-Fi connection and broadcasts a 176 x 144 image, but the broadcaster hopes to extend Live TV out to 3G networks and to add more channels during the coming months.

Live TV is thought to work with a selection of smartphones, including the Android G1 and Nokia N Series devices. Register Hardware tried to access Live TV using an iPhone, the service wouldn’t work.

It’s worth noting that you’re legally obliged to own a full colour TV licence before watching any of the channels on your mobile, though. The BBC warned that it’s “a criminal offence to watch 'live' television without a TV licence”.

Is a critical account of PM's past actions a real emergency, a political emergency, or a free speech emergency?
Legal24 Jan 2023 | 51