Boffin: Titan moon largely made of LPG, not cheese

An American scientist believes he may have come up with an explanation for the curious lakes of liquefied petroleum gas found at the polar regions of Titan, moon of Saturn. It could be because Titan is not spherical, but has a liquid layer which is. 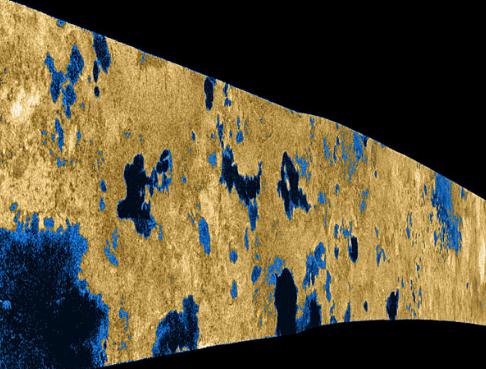 The LPG fields of the Saturnian moons: rich, but inaccessible.

"Since the poles are squished in with respect to the equator, if there is a hydrocarbon 'water table' that is more or less spherical in shape, then the poles would be closer down to that water table and depressions at the poles would fill up with liquid," says Howard Zebker of Stanford Uni.

The surface temperature on Titan, far from the sun in the chilly outer reaches of the solar system, is a bracing -180°C. Most things which are liquid on Earth are frozen there, but propane - a primary constituent of liquefied petroleum gas (LPG), the Earthly vehicle and heating fuel - is still runny. Methane and ethane, also popular as fuel among the human race, can exist both frozen and as liquids on Titan. If the Stanford geophysicist's theory is correct, vast underground oceans of liquefied-gas fuel lie below the moon's frozen surface - showing just a little at the low-lying poles.

Zebker's new research involves the use of radar measurements from the Cassini space probe, now orbiting Saturn, to map the shape of Titan's surface. This has been difficult to achieve thus far owing to the moon's unusual, dense nitrogen atmosphere.

According to Zebker's Cassini analysis, not only does Titan have squashed-in poles, it is also elongated in the direction of Saturn. On top of that, its mountaintops are usually lower than the surrounding terrain.

Zebker thinks that this last might be because the mountains are made of ice, which is heavier than the other surface materials on the Saturnian moon - frozen ethane, methane and such. The hefty iceberg mountains naturally tend to sink down into basins created by their own weight.

The moon-mapper cautions that other boffins are hard at work researching Titan's gravity field, until now poorly understood. He says that their results, combined with his, will probably offer a better picture of what's really going on with the mysterious moon. He also suggests that there may be "active geophysical processes occurring inside Titan that further distort the shape".

There's more layman-level stuff from Stanford Uni here, or subscribers to the journal Science can take their hard sums straight up here. ®

Enceladus might have been knocked over by an asteroid

Cosmic bonks, breakups led to birth of Saturn's moons as dinos died out

The Earth moved for Filipino Tweeps before needles moved for boffins