A week after it was shown to a group of industry engineers during a company event in Mountain View, Google has publicly released a video detailing its once top-secret data center design.

As has been rumored for years - and as The Reg confirmed this fall - Google pieces together its data centers using intermodal shipping containers pre-packed with servers and cooling equipment. The video - posted to YouTube - provides a six minute tour of the company's inaugural containerized data center, which went live sometime in 2005. Google calls it, well, Data Center A. 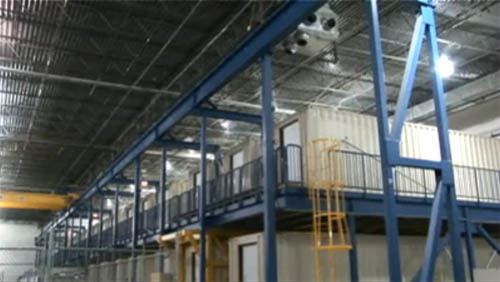 It's unclear where the facility is located. But presumably, it's one of three data centers Google has built in The Dalles, Oregon. According to Google, it holds 45 shipping containers, and each of these data center pods houses around 1,160 servers. The entire facility has a power capacity of 10 megawatts and a trailing twelve-month average Power Usage Effectiveness (PUE) value of 1.25.

The video tour begins in the outdoor equipment yard, which houses the cooling towers, the power-distribution centers, and the generator farm. Google says its transformer exhibits a better than 99.5 per cent efficiency, and boasts about the relatively small size of its cooling radiators.

After a shot of the generator farm, the camera follows the low-voltage cables that carry power from the distribution center into an indoor pod hanger, where they eventually connect to switch panels for each container. The video then jump-cuts to the facility's cooling plant, where a portion of the water streaming from the cooling towers in redirected to a sidestream filtration system.

Google admits to its fair share of leaks in the cooling plants. Apparently, the pipes aren't sealed as tightly as the mouths of company employees. 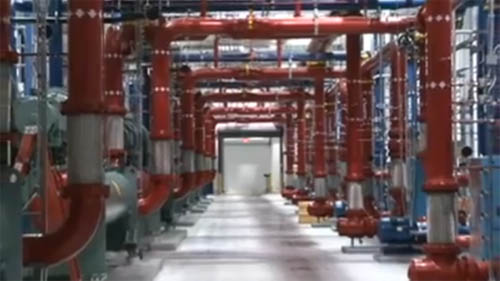 Because it uses the most power, Google calls the water chiller the company's "biggest target." An important part of reducing chiller hours, the company says, is the use of plate and frame heat exchangers, which exhibit low-approach temperature characteristics.

Pipes then carry the chilled water from the cooling plant into Google's container hanger. Fifteen containers are lined up on one side of the hanger, and thirty more are slotted into two stories on the opposite side.