As the video shows a technician riding a foot scooter towards one of the containers, the company refers to the scooter - in recitative monotone - as a "Google-provided personal transportation device." Naturally, the Chocolate Factory would never force its Oompa Loompas to pay for their own scooters. After entering the container, the technician is seen swapping out one of Google's previously top-secret servers, which includes it own battery-power UPS. Again, Google's claims 99.5 per cent efficiency.

The aisle inside the container is cooled around 27 degrees Cecilius (81 degree Fahrenheit). According to Sun Microsystems, which has built its own data center containers, a data center can save four per cent in energy costs for every extra degree (Fahrenheit) on the thermostat. If a data center can run at a higher temp, you can use less power and spend less money on cooling equipment. 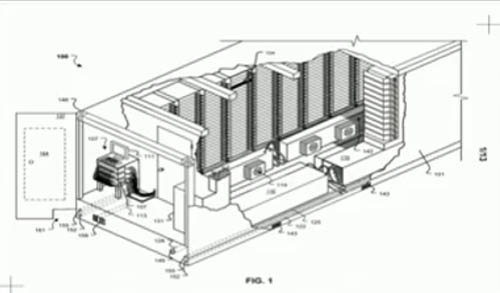 In the video, Google says the high cool-aisle temperatures are "enabled by attention to good airflow management." But according to one former employee speaking with The Reg, Google has insisted on an Intel guarantee that the processors it purchases from the chip giant will operate at temperatures five-degrees centigrade higher than their standard qualification.

Before showing off the container's underfloor, you're treated to another ill-advised attempt at Googlehumor. The lights turn off in the container, and our monotone narrator calls it "Google's idea of nightlife." 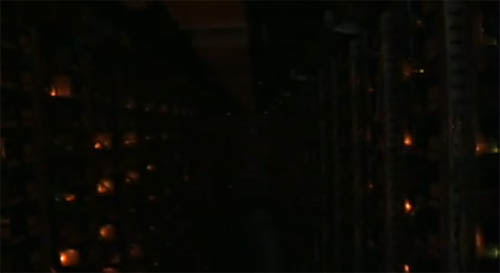 The video is otherwise short on detail. And it's worth remembering that this was Google's first containerized data center. In all likelihood, its newer data centers - Google runs at least 36 sites across the globe, and several more are under construction - are even more efficient than its 2005 model. Google's specs for Data Center A are matched by today's cutting-edge designs for other operations.

We asked Google to discuss its data center designs, but it declined.

Brewster Kahle and the Internet Archive publicly pitched the containerized data center idea in the fall of 2003, and that December, Google filed for a patent describing a data center pod of its own. According to Kahle and a 2005 expose from Robert X. Cringely, Google co-founder Larry Page witnessed one Internet Archive pitch a little more than a month before the patent filing. The patent was granted in October 2007. The company has also patented containerized data centers that float on water.

According to the aforementiond former Google employee, the company's containerized data center operation is known internally as Project Will Power. Today, countless other operations are following suit, including arch-rival Microsoft. The idea is that you can manufacturer these standardized data centers from a central location and ship them across the globe where needed. This is cheaper - and quicker - than building centers from scratch. ®

You can view the whole video here:

Redmond says it used forensics to find files on its own gear... rather than avail itself of deals for rivals