Microsoft: have it your way on IE 8

Microsoft will soon start encouraging users running old versions of Internet Explorer to upgrade to the latest edition of its browser.

People running IE 6 and 7 on Windows XP, Windows Vista, Windows Server 2003 and Windows Server 2008 will in the third week of April receive a notification through the Automate Update service that encourages them to upgrade their system to IE 8, Microsoft has said.

This is not a hard sell, though. IE 8, released last month, won't start automatically installing itself on your machine - you'll have to opt in, by clicking the install button itself on the update message's accompanying screen. You can also download from here. 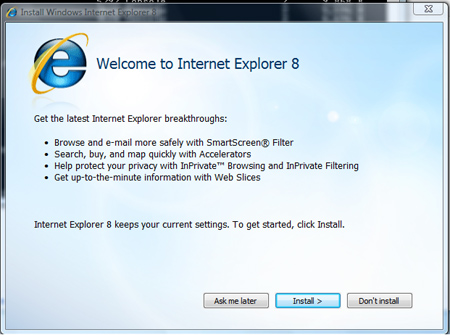 Furthermore, Microsoft re-iterated that users of Automatic Update that want to move to IE 8 in their own time can block the browser's download using its Bitlocker Toolkit released in January.