SLED 11: a distro for businesses, not idealists

Review SUSE Linux Enterprise Desktop (SLED) is perhaps best known as the distro whose owner Novell, in 2005, signed an extremely unpopular patent-protection deal with Microsoft. From that moment on, Novell was essentially dead to those that prize the free software aspects of Linux.

Given SLED's $120 price tag, individuals unconcerned by Novell's ideological stance will likely not be interested in this distro, especially when Ubuntu, Fedora and dozens of other Linux distros are "free".

SLED is designed for businesses. Much of Novell's development efforts on SLED are geared toward making Linux play well with Windows. For businesses that need those features, the SLED distribution makes a compelling option.

The enterprise version of SUSE should not be confused with openSUSE, the free, open, community-supported version, which has no direct connection to Novell.

So what do you get for your deal with the devil?

Well, SLED 11 brings all the updates found in openSUSE 11.1 and also includes a number of Novell-developed features like the AppArmor security tool, and some proprietary apps you won't find in your typical open-source Linux distro, such as Adobe's Acrobat Reader.

You'll also find support for Mono, the Novell-backed implementation of Microsoft's .NET for Linux and Unix that allows some .NET applications to run on SLED. Home users might not have much use for .NET, but given that it's a popular choice for businesses' internal applications, ensuring that those apps can run in SLED is a big part of Novell's integration strategy.

But SLED's main selling point for businesses is that it can be quickly and easily integrated into existing Windows networks. True, with a bit of tinkering and manual configuration you can get other distros to connect to Windows networks and play nice with app, print or file servers, but SLED just works. 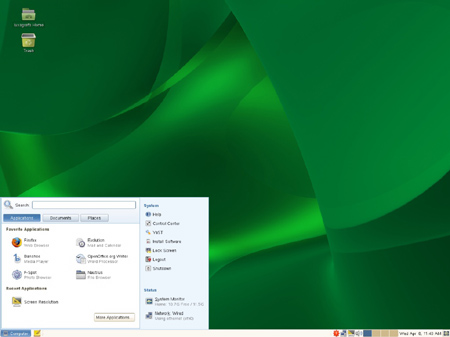 Installing SLED 11 is a snap. Just insert the DVD, select your preferred setup and click install. Once you've said "Yes" to a slew of proprietary licensing agreements - Flash, Java, Agfa fonts and more - the whole process takes less than half an hour. We opted to install the default Gnome 2.24, but you can also install KDE 4.1 if Gnome is not to your liking.

Also worth noting - SLED 11 uses the ext3 filesystem rather than the ReiserFS as in the past. For those that love the ReiserFS, it will still be supported, you'll just have to set it up yourself before installing.