Get sweaty on the COLBERT

NASA has selected the name "Tranquility" for the International Space Station's new living quarters, not only rejecting attempts by Comedy Central's Steven Colbert to get the new node named after himself but also largely ignoring a popular vote on the subject. 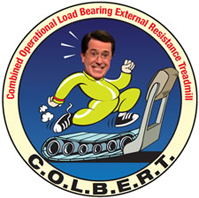 Despite "Colbert" winning the space agency's Help Name Node 3 online poll by a landslide, NASA opted to name the module after after the area of Apollo 11's historic lunar landing, made 40 years ago this July.

"We don't typically name US space station hardware after living people and this is no exception," said Bill Gerstenmaier, NASA's associate administrator for space operations. "However, NASA is naming its new space station treadmill the 'Combined Operational Load Bearing External Resistance Treadmill,' or COLBERT. We have invited Steven to Florida for the launch of COLBERT and to Houston to tryout a version of the treadmill that astronauts train on."

Tranquility wasn't the second most popular vote behind Colbert, or even the fourth. The chosen name was in fact a distant eighth in the list of public write-ins, begging the questions: what was the point of the poll anyway?

NASA's node-naming campaign asked its online audience to vote for the module's new name by choosing one of four NASA-approved options (Earthrise, Legacy, Serenity, Venture) or by making their own suggestions. Soon after the poll was opened, Colbert hijacked the contest by urging fans of his television show to enter his name in the running - ultimately earning 230,539 votes compared to the second place and NASA-approved choice, "Serenity."

The poll was supposed to be part of NASA's strategy of public outreach to drum up interest in the ISS, which clearly mistakenly suggested the public's opinion would have factored in the naming. The contest rules stated that while NASA will take into consideration the results of the voting, it "reserves the right to ultimately select a name in accordance to the best interests of the agency." Most following the contest assumed if the agency wasn't going to name the node Colbert, it would at least choose the most popular NASA-approved suggestion.

Newly-Christened Tranquility is scheduled to arrive at NASA's Kennedy Space Center in Florida in May. It will depart for the ISS on space shuttle Endeavour's mission STS-130, targeted for a February 2010 liftoff. ®