DHS offers glimpse into life of its top snot'n'slobber expert

The widely-feared US Department of Homeland Security (DHS), in a praiseworthy attempt to reach out to the American people, has offered up a glimpse into the exciting life of its top spittle expert.

According to the DHS:

Mark Nicas has given some of his best years to spittle. He builds models – the mathematical kind – of how someone else's slobber ends up on you. The size of the particles, whether they come out in a dry cough or a wet sneeze, their evaporation rate, air speed – these are all complications, reasons why people like Nicas can spend careers piling up academic papers... 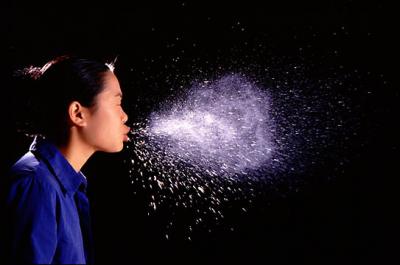 Disaster comes not only from the mouth, but the nostril also.

DHS emphasis there on the mathematical nature of the slobber modelling. Presumably they want to confirm that there isn't any hideous wind-tunnel research going on, or live urban biohazard slime-strike trials of the sort favoured by the British government.

Prof Nicas is apparently just one of an elite team of DHS scientists grappling with the tricky problems of snot-, spit-, dribble- and other bodily-emission-related terrorist outrages. Nicas warns that anyone could be a possibly-unwitting terrorist bio-strike suicide attack vector and/or pandemic plague carrier.

"When you get on an airplane, it's always best to sit at least three rows from a coughing person," he says. "You don't know what they have."

The DHS also warns prophetically against the dreaded drivel- or dribble-borne disease of doom:

Statistical predictions about flying saliva may seem like academic caricature. But they have important real-world applications to terrorist biological attacks and deadly diseases like bird flu that can ripple quickly through American cities. Disaster comes from the mouth, warns an ancient Chinese proverb on the dangers of linguistic drivel. But understanding the infectious potential of biological drivel may be the secret to restoring national health in a pandemic.

Nicas insists that his job as perhaps the world's top expert on the terrorist phlegm outrage threat hasn't made him paranoid.

"I have a good sense of the risks," he admits, "probably more than most people."

Besieged Autonomy CEO, CFO both had fingers in the startup