Rocket braking is so retro <cough>

NASA-funded R&D engineers are working on plans for future spaceships to enter orbit around Mars using a doughnut shaped, steerable balloon-chute to slow down by flying through the Red Planet's atmosphere. 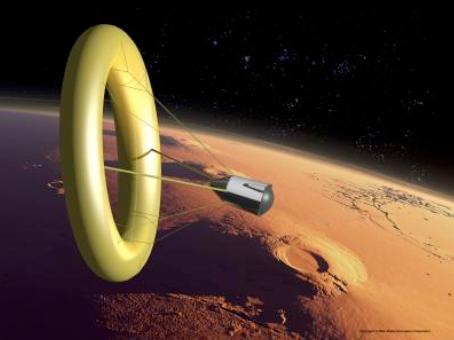 Nobody believed Zralthar about the doughnut ships from Earth, until it was too late.

Global Aerospace is a Californian firm founded by ex-NASA engineers and in this case funded with NASA Small Business Innovation Research (SBIR) money. The company announced yesterday that it would start modelling work aimed at developing what it calls a "lifting-towed-toroidal-ballute" for use by spacecraft approaching planets with a view to entering orbit around them, or perhaps subsequently landing on them.

The Global Aerospace team think that an inflatable "ballute" (a balloon-parachute combo) could be very useful for slowing spacecraft down by atmospheric braking. Even a slow interplanetary journey would tend to see a spacecraft arriving still going at very high speed, so much so that left to itself it might simply zoom past, escaping the destination planet's gravity field and barrelling off uselessly into space again.

It would, of course, be possible to slow down using rocket thrust. But this means carrying a significant amount of fuel all the long and weary way from Earth - and consequently much less payload.

According to Global Aerospace, it would make more sense to slow down by steering a speeding interplanetary ship into the planet's atmosphere, letting friction slow it down without use of fuel. In order to avoid getting awfully hot, the plan would be to fly through the thin upper reaches of the atmosphere at hypersonic speeds, with most of the braking provided by the inflatable ballute rather than the ship itself.

The clever bit with the Global Aerospace doughnut-balloon wing/chute is that it provides lift as well as drag, and it's designed to be controllable from the ship. The Californian engineers believe that this will make longer flights through the atmosphere feasible, getting more braking for a given size of ballute - and so more payload. According to the company's statement:

The use of smaller ballutes will make them more attractive and feasible for missions to planets such as Neptune, where high heating rates require extremely large ballutes for drag-only capture. Ballutes can also be used to decelerate large payloads for landing at Mars. In this case, lifting ballutes can significantly reduce deceleration forces, which can result in lower mass ballute systems and reduced g-loads on crews that fly them to the surface of Mars.

Given the nature of penny-ante SBIR efforts, we're only looking at computer modelling and so forth here. Global Aerospace say that the tools they plan to develop will also be useful for designing various kinds of aeroshells for Mars landers, including lifting-body ships and cunning hypersonic shockwave-rider jobs. ®