A broad array of storage devices - from an 8U storage server powered by dual Intel Xeon 5500s to a multi-slot memory card reader/writer with four eSATA ports - will debut at next week's National Association of Broadcasters' 2009 NAB Show in Las Vegas.

The just-released Stirling X888 scalable storage server from Aberdeen is the aforementioned Xeon-powered beast, which couples dual Xeon 5500-series processors with an Intel 5520 Tylersberg chipset. Starting at 48TB, the X888 can be expanded to - as the company puts it - "well over 400TB" with Aberdeen's XDAS expansion enclosures. 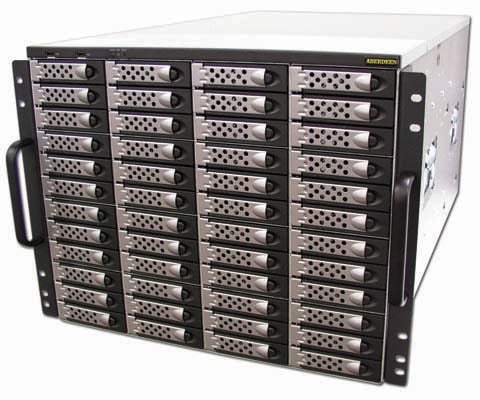 An Aberdeen spokesperson told The Reg that the X888 in a 50TB configuration "comes in under $20k." You can check out pricing for other configs here.

Three new systems will also be shown by Enhance Technology. The 2U six-bay EnhanceRAID TS2060 rackmount series includes the dual gigabit-ethernet iSCSI TS2060-IP RAID, as well as the TS2060-SS SAS, which the company claims can deliver 350MB/sec over its SFF-8470 SAS port. Options for both include a tape drive, CD/DVD player/recorder, and connection over eSATA to the company's "military grade" IS210 external HDD enclosure.

If you simply must have a Quantum DLT tape drive, Enhance can provide

Enhance will also be introducing its StorPack S23T/S34T/S35T removable drive-tray desktop series, available in three, four, and five drive configurations. If an industrial-strength desktop RAID could ever be considered sexy, this series might contend for that adjective.

The third ATTO newbies are the ExpressSAS SAS/SATA RAID adapters, which the company claims are the "industry's first 6Gb/s SAS/SATA host adapters." Available in eight and sixteen port models (either external or internal, or four internal and four external), the ExpressSAS supports RAID levels 0, 1, 4, 5, 6, 10, 40, 50 and 60, and includes ATTO’s DVRAID technology designed to facilitate and protect digital-video editing.

Finally, Sonnet Technologies is introducing the impulse-buy item of the show, at least for professional photographers: the Qio memory card reader/writer. The company claims that the Qoi can read and write to "just about every memory card" - which isn't unusual in this multi-card age. What does make the Qio especially attractive are its four eSATA ports. ®