Jackalope gets jaunty with Ubuntu nip and tuck

Review Ubuntu 9.04 - officially launched today and due to be ready for download on Thursday - is a worthwhile upgrade for Ubuntu fans.

Ubuntu steward Canonical has been working hard to improve the look and feel of Ubuntu and the Jaunty Jackalope edition brings quite a few refreshing touches to the old exterior.

The default theme is still the familiar brown, but numerous small improvements to dialog boxes, splash screens, and a flashy new login screen give Ubuntu a slicker, more professional feel. There's also a new theme named New Wave that's a nice mashup between the DarkRoom and the default Human theme.

Jaunty Jackalope brings quite a few changes for Ubuntu users, including Canonical's controversial decision to include a new notification system and message-indicator applet. The Canonical-developed notifications system is designed to offer updates in an unobtrusive way - a small window pops up and informs you of events such as new e-mails and instant messages as well as system events such as changing the volume or when a CD finishes burning.

The messages themselves look a bit like the Growl notification system in Mac OS X, and we found them to be a pleasant and informative system. But of course, the messages represent a major departure for Ubuntu, and those of you who dislike it when Linux distributions include experimental features - rather than sticking with the stock GNOME components - may not be thrilled.

Canonical's founder, Mark Shuttleworth, has acknowledged that not everyone is going to like the new system. However, he's hoping that users will provide feedback and help to build a useful and robust message system that will eventually be adopted universally.

For now, while rough around the edges (not every application is able to tap into the message system as it stands), the simplicity and elegance of Ubuntu's early design look very promising. 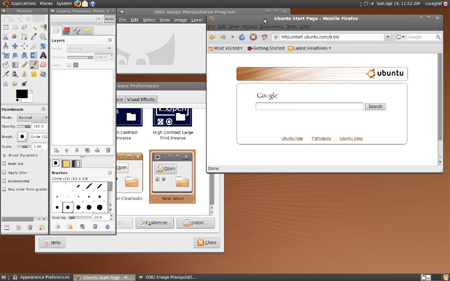 Another area of Ubuntu that shows promise is the latest version of the GNOME desktop, which is now at v2.26. The new GNOME brings UPnP support for the Totem media application, which lays the groundwork for much better streaming audio tools - good news for those of you with dedicated music servers on your local network.

Unfortunately, the Ubuntu release candidate we tested did not actually include the Coherence tools - as the UPnP plugin is known. To take advantage of Coherence, you'll need to manually install the plugin or check out the latest version of Totem using Subversion. Unfortunately, after wrestling with some rather cryptic dependency errors for a few hours, we eventually gave up on Coherence.

Coherence has a lot of promise and hopefully the Totem developers will work out the bugs, because we'd love to see GNOME make streaming music to our Ubuntu box as easy as iTunes does for Mac and Windows systems.