More power to you. More money to Big Blue

PVU on the table

The latest and greatest PVU table put out by IBM is here, and you can see how the pricing is not really based on the rough performance of the chips any more, even if that was the intent: 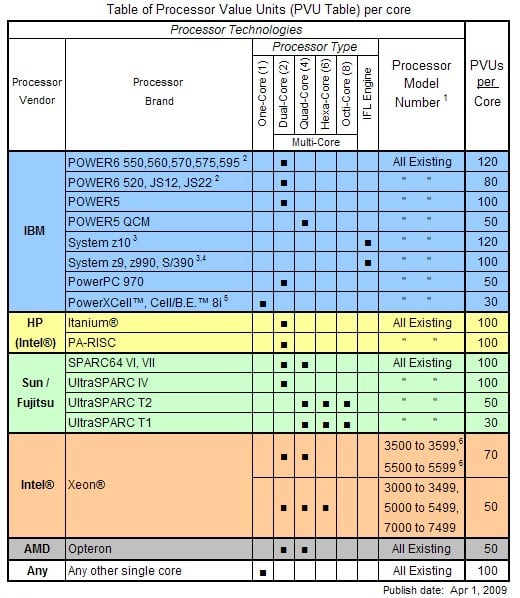 If IBM wanted to be more fair, it would rate the Nehalem EP chips at around 100 PVUs, about twice that of the Xeon 5400 parts. But that can't even come close to fixing the issues with the PVU pricing scheme, since within each processor category there is a wide variety of clock speeds and performance. Basically, this PVU scheme has the right intentions in terms of simplification, but it makes little more sense than charging by system or by processor socket or by the clock speed of the processors running in the box. You can argue this a million different ways. But there is a way to do real PVUs, and IBM knows full well how to do it.

What IBM ought to do is establish a rating system across all processor types and speeds and price based on this. Each and every mainframe has a benchmark number called a Large Systems Performance Reference (LSPR) rating, which the IT consultancies and IBM use to convert back to the ever-popular MIPS (millions of instructions per second) rating used by mainframe shops. IBM also has what was once a more precise software pricing metric, called Metered Service Units (MSUs), which it uses to price mainframe software that is aligned more or less to the capacity that companies. Every possible clock speed combination on mainframes has a different rating.

On Power-based servers, IBM has the Commercial Performance Workload (CPW) benchmark for OS/400 and i workloads and the Relative Performance (rPerf) benchmark for AIX workloads. Both are loosely based on the TPC-C online transaction processing benchmark test, with the I/O requirements curtailed and coded to stress the processors and memory. Each and every possible clock speed and processor core count in a Power Systems box has a different CPW or rPerf rating.

Even though IBM has fine-grained performance data (which is obviously limited to a single workload and not necessarily representative for a particular customer, I know), for decades IBM assigned machines into software tiers that often made about as much sense as PVUs. And when multicore processors became the norm in the 2000s, IBM switched to per-core pricing for operating systems, which is simple and which benefits those who keep moving to faster processors.

The point is, mainframe and Power Systems shops are concerned is that they know how to reckon the relative performance of the machine they have, which might be one, two, three, or four years old of a given configuration, against the machine they want to move to, which would presumably have more capacity. You just subtract the ratings from each other and there's your incremental performance gain on which to calculate whatever incremental software fees are due. And if there is no gain, then there is no increase. And if customers virtualize and use only a portion of a machine to run the IBM software, then the price should - gasp! - go down.

To be fair, what IBM needs to do is have a single CPW-style benchmark that spans all machines, and base PVUs on that. But it is far easier and less costly to pull the numbers out of its Big Blue, er, hat. ®