Destroy industry and money and make us all wealthy? Sweet

Next month will see a new version of the self-replicating RepRap machine, but owners of the existing model won't need to buy a replacement - they'll just be able to just print themselves an upgraded version.

RepRap was developed by a team led by Adrian Bowyer from Bath University, who makes rather audacious claims for his baby. The machine is basically a cheap 3D printer, but one that is able to make all the component parts of itself - well, 56 per cent of them at least - and will soon be tasked with printing out the parts of its own replacement. 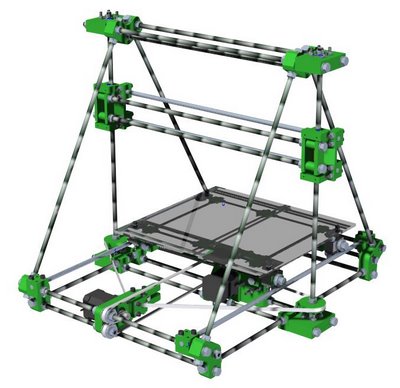 3D printing is nothing new, but doing it cheaply is, and even if you've not got a RepRap handy to print out the custom parts needed there's an on-line store that will supply them to you for around €500. Then you'll need a load of threaded rods, nuts and bolts, wire, and a selection of electric motors - but Dr Bowyer assures us that all that kit is available in the nearest DIY store or Maplin.

You'll still need a small lathe to drill out a bolt to make the melting chamber, so it's not quite a spare-room project yet, though you could always buy one of those online too.

Dr Bowyer reckons it takes a beginner about ten days to put together their first machine, after which they can print out coat hooks, cups and anything else they can export from a CAD package. The machine takes Polylactic Acid (PLA), or Acrylonitrile butadiene styrene (more or less what Lego is made of), from a standard plastic-wielder's roll and deposits dots of it in layers to build up the shape.

You could, of course, just buy a bag of Polymorph, drop it into boiling water and burn your fingers moulding into your desired shape while it cools - that would be cheaper and a lot less effort, but the RepRap can create objects to a much higher degree of accuracy than is possible with slightly-burnt fingers (accurate to .1mm, with each dot being .5mm in size), and it can do so repeatedly.

Not to mention that Dr Bowyer wants to see RepRap doing production-line work rather than prototyping, and even claims that RepRap is a green solution in that it removes the need to ship injection-moulded products around the world - a claim that would make more sense if it wouldn't remain necessary to ship rolls of welder's plastic around the world instead, even if PLA can be made from vegetable starch.

Dr Bowyer is nothing if not optimistic about how his machine will change the world, having designed it to run off a car battery with visions of RepRaps reproducing themselves in jungle villages - albeit ones equipped with a small lathe, a B&Q and a Maplin.

Recreating electric circuits is a challenge, though in the last few days it has been done using a dual-head design to lay down a conductor, and be might be possible to create a 3D labyrinthine circuit of tunnels into which a low-melting-point conductor can be poured. But that's going to have to wait until version three at least.

For version two the emphasis is on size, mobility, and the ability to use a second head. A second head can be used for a second material - a conductor, or a different coloured plastic, or something water-soluble that can be used to support overhanging components (the team is currently experimenting with icing sugar).

The existing model is also rather fragile, and takes about a day to recalibrate if moved, but will still be able to print out the unique parts needed to make its replacement - which can then be completed with a swift shopping trip and a few hours in the machine shop. So we needn't worry about being overrun by self-replicating machines just yet. ®

Hey, Glaswegians, care to share those negotiating secrets with Apple Store staff in the US?
Personal Tech9 Feb 2023 |