The 40nm, 750MHz core is connected to 512MB of GDDR 5 graphic memory running at an effective frequency of 3.2GHz, but 800MHz in reality. Those speeds yield a texture fill rate of 24 billion texels per second and a memory bandwidth of 51.2GB/s. 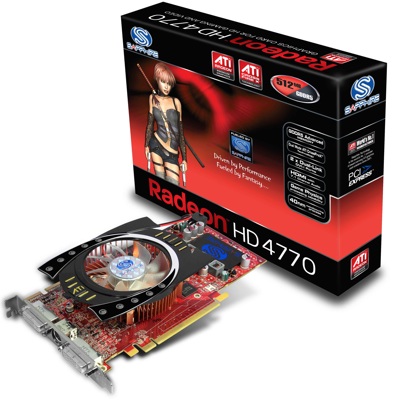 Sapphire was one of the first vendors to announce 4770-based boards, specifically the Sapphire HD 4770, which, the company claimed, consumes no more than 80W of power. It's a two-slot board with two DVI ports and a TV-out connector on the backplane. These feed a bundled HDMI dongle, which also feeds audio to the screen it's connected to.

The Radeon HD 4770 supports CrossFire X for multi-card rendering, and DirectX 10.1 for the latest games.