$400m robot radar dirigible to stay up for 1 year+

The famed Pentagon Q-branch boffinry hothouse, DARPA, has unveiled another ambitious plan to further US military-technical dominance. It has given $400m to American weapons globocorp Lockheed to develop a solar-powered robot radar airship, able to lurk in the stratosphere for a year at a time, potentially tracking individual people walking about on the ground across areas 1200km wide. 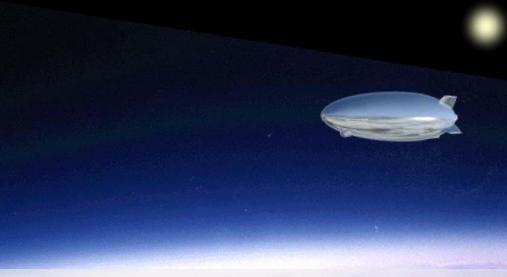 Yesterday's contract announcement was for Phase 3 of DARPA's Integrated Sensor Is Structure (ISIS) project, in which a flying sub-scale demonstrator will be built to prove that the concept can work as planned. Phases 1 and 2 consisted mostly of design studies and materials work.

The idea of ISIS is to hugely improve on what a normal airship can do, by using the ship itself as a radar antenna rather than carrying a separate piece of machinery - hence the name. DARPA believe this will hugely increase the size of radar antenna a stratospheric airship can carry, which in turn means the radar would deliver much better sensor resolution for much less power.

The lowered power requirements of the ISIS radar-ship, DARPA believes, will mean it can run on solar power. Excess energy generated during the day will be stored by cracking water into hydrogen: at night, this will be burned in fuel cells to keep the ship flying and its radar shining even in darkness.

DARPA calculate that the ship should be able to cruise at 60 knots or sprint at 100, which will let it deploy from the US to a global troublespot in 10 days. It will then be able to hold station easily in the stratospheric "wind bucket" found at 65,000 to 70,000 feet, scanning the ground beneath it with its all-seeing radar mega-eye.

The performance of the massive scanner, according to DARPA, should be such that it can track unobscured "dismounts [people walking] across the entire line of sight" - in other words out to the horizon, which at operational height will be 600km away.

That said, the contract announcement suggests a slight bit of neck-winding, referring to an ability to track "all ground targets" to 300km. Closer in, the Pentagon boffins think, it will be capable of tracking such small objects even through overhanging foliage. Performance against easier airborne targets - planes, missiles etc. - would definitely be right out to the horizon at 600km.

If the ISIS can do all that DARPA suggest, it will handily trump most of the other aerial scanners in use by the US forces, including AWACS sky-scanner planes, the smaller E-2 Hawkeye AWACS that flies from US carriers, Joint STARS ground-sweeping tank sniffers, and the JLENS moored-balloon radar plan. The potential would be there perhaps to do without all these things, simply assigning a single ISIS ship in place of the several AWACS or whatever you formerly needed so as to keep one up on patrol.

An ISIS airship would potentially be vulnerable to enemy action, but at 70,000 feet only quite serious enemies - the sort who could also threaten AWACS or JSTARS aircraft - would have any chance of hitting it. And those planes carry large crews, whereas the ISIS is unmanned.

So this is potentially big news for the US military, the more so in that ISIS has now made it to Phase 3 - we're no longer talking just about design studies here. The privacy/surveillance issues - the chance that ISIS spy-ships might lurk one day above US or allied territory, tracking every vehicle or even every person walking about - could be even more significant. Forget about numberplate cameras or face tracking; you'd have to live underground to avoid this sort of thing.

For those who'd like to know more, there's a pdf on ISIS from DARPA here. ®