Mitsubishi to release e-car in UK this year

'Leccy Tech While the global car market may be in the toilet, Mitsubishi has high hopes for its iMiEV e-car.

Most of the increased sales will come from the introduction of the left-hand drive version which will be sold in Europe by PSA/Peugeot-Citroen and have a Peugeot badge on the nose. 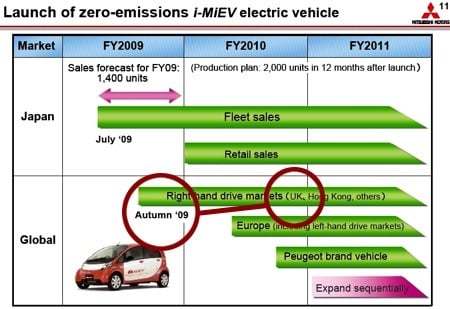 According to an interesting slide (above) buried among the dry-as-dust numbers, certain right-hand drive markets, including the UK and Hong-Kong, will get the iMiEV as early as the autumn of this year. As we speak, Reg Hardware is knocking on Mitsubishi UK's door to see how true that is.

Of course, while the iMiEV is all well and good, what we really want to know is if and when the iMiEV Sport Air is coming our way. ®

Mitsubishi grounds its attempt to crack the passenger jet market

Plenty of time to get your apps through Cupertino's rigorous testing