How come Microsoft is so popular?

A couple of relatively new entrants into the storage space, namely Cisco and Riverbed, also enjoy very favourable positions with respect to organisations stating that they are “becoming important”, results that again transcend scale of enterprise. It will be interesting to see how perceptions of these two vendors develop in the storage arena over the course of the next two years, especially as it is likely that there will be considerable marketing battles across the entire domain of hardware and management tools in the coming years.

This is especially the case when one considers Cisco given the networking giant’s more recent announcements around the unified data centre, which make it a server vendor in all but name and is attempting to pull all major infrastructure elements, including storage and its management, into one system. 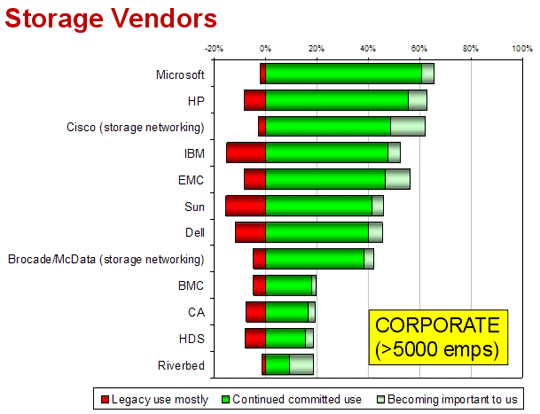 When it comes to the traditional storage heavyweights all continue to enjoy a positive balance of “continued committed use” compared to those who regard them as “legacy use” platforms. It is clear that in large and mid-size enterprises HP, IBM, EMC, Sun, Dell and Brocade all enjoy healthy perceptions as platforms for continued use.

Of these traditional vendors HDS would appear to have the most work to perform to let potential and existing customers understand the value its solutions can deliver, especially in the large enterprises, the company’s traditional heartland. It is interesting to see that whilst HDS enjoys a lower profile amongst mid-market and small organisations, the company has almost no respondents in small businesses reporting HDS’ platforms as “mostly legacy use” whilst in the mid-market, as in large enterprise, the proportion is relatively large.

That said, HDS has a very small awareness amongst SMBs although the company has been looking to find ways into these markets where it clearly has room to grow. However the company should not lose focus on its core enterprise customer base where it appears to have work to do to enhance the perceptions of some customers. In fact this can also be said in respect of most of the traditional vendors where there is undoubtedly a base of respondents that see such platforms as “mostly legacy use”, a position with which none of the vendors concerned will be happy.

When considering the results from just small organisations it is clear that Microsoft, Dell and HP enjoy the highest profiles with Cisco, IBM Sun and EMC some way behind with Brocade even further down the table. The development of the activities of the major vendors and their various channel operations will be worth studying in the coming months as for the last two or three years each has sought to strengthen their positions in the various SMB spaces. The current slow economic climate is likely to refocus attention on these sectors, especially if large enterprise spending is any way inhibited in the medium term. 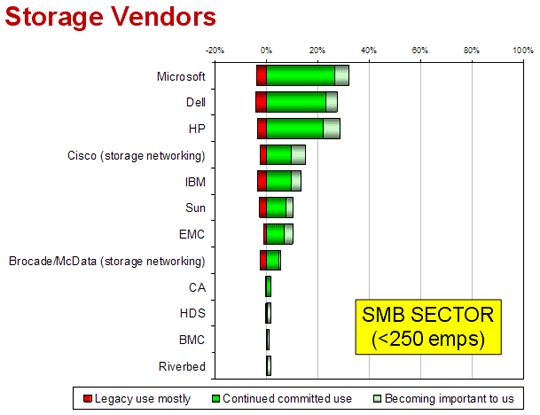 There is another “storage architecture” factor that may have a considerable impact over the course of the next 12 months in organisations of all sizes, and this is iSCSI. In many respects iSCSI has the potential to be a visibly disruptive force, especially in terms of the perceived simplicity of its introduction and apparent acquisition cost-effectiveness of this storage architecture. For both established storage hardware supplies as well as new entrants to the market, iSCSI has attributes that could, if well marketed, attract the attention of small, medium and large organisations. All things considered it will be very interesting to see how everything pans out.

Even in today’s harsh economic climate a large number of infrastructure based projects and initiatives are being undertaken across organisations of all sizes and in all vertical sectors. A closer look at the details, especially those running under the banner of “consolidation” highlights the importance of storage systems to getting said initiatives up and running. But, more importantly, it highlights the need to ensure that ongoing storage management be as effective as possible to minimise both the costs and the risks inherent in data management and storage systems.

The survey results illustrate that storage related initiatives such as “Storage Virtualisation” and “Storage and information lifecycle management” are to be found in a large number of organisations. It will be interesting to see how quickly the nascent interest in desktop virtualisation initiatives and the increasing deployment of thin client systems have a visible effect on infrastructure projects, as well as initiating significant changes in the storage architecture itself, as they inevitably must.

Note on research sample
The findings here are based on an online research study conducted on The Register in October 2008, which garnered 1,125 responses. As a result of the online nature of this study, the respondents will have been self-selecting, and drawn from a technology-literate group. We are also conscious that the current financial climate may cause some variability in responses that might be influenced by ongoing economics. As the study covered a broad range of areas and did not particularly dwell on financial aspects we do not believe there will have been any significant skew towards one technology area or another; nor do we believe there will have been too much variability due to economic criteria in this case.