And the Lord said unto Crufts: Let there be light

South Korean scientists say they've cooked up a quartet of glow-in-the-dark beagles, boasting red nails and abdomens even under normal light and which emit a spooky red glow when subject to ultraviolet. 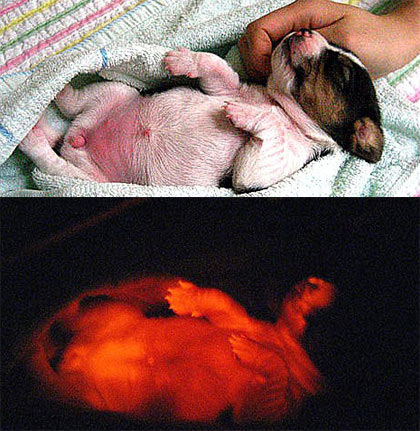 The four transgenic mutts - all dubbed "Ruppy" (Ruby + Puppy) - were produced by a team from Seoul National University led by professor Lee Byeong-chun, AP reports. The scientists injected fluorescent genes from an unspecified source* into beagle skin cells, injected these into egg cells which were in turn implanted into a surrogate mum.

The result was six puppies born in December last year, and although two subsequently died, the South Koreans are suitably chuffed with the results of their fluorescent beagle experiment.

Lee insisted to AP that the glow-in-the-dark pooch is not merely a novelty, but could shed light on developing future cures for human diseases. He told AP: "What's significant in this work is not the dogs expressing red colours but that we planted genes into them."

The scientist did, though, remain tight-lipped on exact details of the research, saying it was still "under way".

Those of you who may be a tad sceptical and inclined to think Lee is simply trying to tap into press enthusiasm for self-illuminating animals should note that his claims have been backed by veterinary professor Kong Il-keun of South Korea's Gyeongsang National University, who brewed up a fluorescent cat himself in 2007.

He confirmed he'd seen Lee's puppies (whether under visible or ultraviolet light is not noted), and described them as "genuine clones". ®

*Jellyfish, we reckon. Where would modern science be without the fluorescent jellyfish gene, eh?