Somewhere with lots of trees, apparently

The US Special Operations Command - SOCOM, America's secret military elite - is to double its fleet of robot whispercopters in coming years, according to reports.

It has also been revealed that eight of the high tech droid kill-choppers will soon go operational as surveillance craft at "an undisclosed location" overseas. 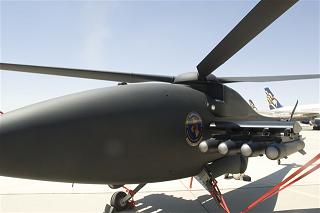 The news comes from Flight International, reporting on an interview with Major Scott Beall of SOCOM. Major Beall is the secret supertroopers' programme manager for the Boeing A160T unmanned helicopter.

The A160T, as regular Reg readers will recall, is remarkable not so much for being unmanned - there were already other robotic helicopters on offer. Rather, the A160T stands out for its unusual variable-speed rotor tech.

Normal choppers spin their blades at a fixed rate, which simplifies engineering but limits performance. Not so the A160T, which can whirl its rotors fast in the hover but bring revs down in the cruise. Boeing say that this lets it hover out of ground effect* at impressive altitudes - as much as 20,000 feet above sea level, perhaps - and gives it excellent endurance. The A160T is also supposed to be substantially quieter than a normal helicopter.

According to Beall, three of SOCOM's existing A160Ts will deploy next year to "an undisclosed location", there to fly operational missions carrying the FORESTER foliage-penetrating radar. The undisclosed location, then, is one where enemies of America need to be tracked through woods, jungle or similar. The you-never-saw-us-we-aren't-even-here mob are known to be receiving as many as ten A160Ts already on an "extended demonstration" deal: Flight says that they have confirmed they'll acquire 20 more during the years 2012-2017.

In addition to carrying the FORESTER radar and perhaps the ARGUS-IS multiplex spyeye system, some A160Ts will be armed as strike platforms. Others may be used for resupply missions: the little droidcopters can carry an underslung load of over a tonne, reportedly.

Flight says that Major Beall sees the A160T serving in the mainstream US forces as well as in SOCOM. It might compete with the more ordinary military robocopter from Grumman, the Fire Scout: it might also sniff out roadside bombs, or haul battlefield supplies for the US Marines.

There are no routine plans yet for the droid whirlybird to carry people, though it has been suggested that it might evacuate wounded SOCOM operatives or shot-down airmen in emergencies. ®

*At altitude, as in the highlands of Afghanistan, it's common for a helicopter not to be able to achieve a hover until it has "ground effect" from being very close to the surface. Flying along through the air requires significantly less power than hovering.