Solar Cycle 24 set to be a quiet affair

The Sun's "Solar Cycle 24", which kicked off back in December 2008, will be "the weakest since 1928", according to an international panel of experts.

The "nearly unanimous prediction", as New Scientist describes it, follows a certain amount of hemming and hawing as to quite how much sunspot activity we could expect in the run-up to the "solar maximum", now set for May 2013.

The Sun's 11-year cycles end with a reversal of the star's magnetic field, and are marked by the migration of sunspots to its equator, where they fizzle out. The next cycle is heralded by a new "high-latitude" sunspot, at around 25 to 30 degrees latitude, and whose magnetic polarity is the reverse of those of the previous cycle.

However, the transition is not a cut-and-dried process. New Scientist notes that while the experts had suggested the Sun "would probably hit the lowest point in its activity in March 2008 before ramping up to a new cycle that would reach its maximum in late 2011 or mid-2012", it refused to play ball and "entered an unexpectedly long lull in activity with few new sunspots". 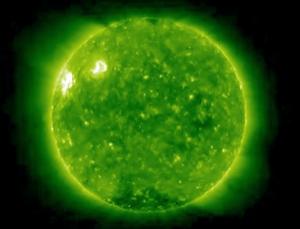 Panel chairman Doug Biesecker, of the National Oceanic and Atmospheric Administration Space Weather Prediction Center, declared: "There's a lot of indicators that Cycle 24 is ready to burst out."

When it does "burst out", the Sun will eventually reach a predicted solar maximum of 90 sunspots per day, which is "below average for solar cycles, making the coming peak the weakest since 1928, when an average of 78 sunspots was seen daily".

That doesn't necessarily mean Earth will be spared the "extreme storms that could knock out power grids and space satellites". Beisecker hedged: "As hard as it is to predict sunspot number, it's even harder to predict the actual level of solar activity that responds to those sunspots. If there are fewer storms, they could still be just as intense."

Not all the experts are agreed that Cycle 24 will be a moderate affair. Panel member Mausumi Dikpati of the High Altitude Observatory in Boulder, Colorado, and colleagues have "developed a solar model that predicts a bumper crop of sunspots and a cycle that is 30 to 50 per cent stronger than ... Cycle 23".

She told New Scientist: "It's still in a quiet period. As soon as it takes off it could be a completely different story." ®