Amazon wants your kidney for the Kindle

Keeps all the money, plus arm, leg, soul

You know newspapers are in trouble when they tout Amazon's Kindle reader as a potential saviour for the business. Many did just that last week, and while they concluded the answer was "No", what were they thinking when they asked the question?

Today's e-readers like the Kindle bring all the expense of a computer, and all the inconvenience that comes from having to lug a computer around with you, to a medium that's cheap, portable and disposable. The Kindle's dull monochrome screen drains all the life and texture from the news - and all the branding and differentiation[*] a newspaper has built up over the decades. Put a newspaper onto a Kindle and you bury it alive in a grey digital coffin.

I'm writing as someone who has spent the last decade reading newspapers on mobile gadgets - from offline readers to the iPhone. Believe it or not, the Kindle is as nice as it gets. It's just that paper - where you can still get it - is a superior technology for browsing and reading to anything digital.

Newspapers are nervous, though, and can't think clearly. They pay enormous sums to digital shroud-wavers like Jeff Jarvis, to hear that they must commit suicide for the greater good of Web 2.0. Because Kindle makes subscribing easy - and subscriptions are a newspaper's Holy Grail - it's got the publishers twitching with excitement. Thanks to the Senate hearings last week, we now all know a little more about what Amazon is asking newspapers to do to kill save them.

"I get 30 percent, they get 70 percent. On top of that they have said we [Amazon] get the right to republish your intellectual property to any portable device. Now is that a business model that is going to work for newspapers? I get 30 percent and they get the right to license my content to any portable device—not just ones made by Amazon? That, to me, is not a model. Maybe what Plastic Logic comes up with or what Hearst comes up with, might provide a good model but today Kindle's are less than one percent penetration in the U.S. market."

"They’re not a platform that’s going to save newspapers in the near term."

Or if he has thinking cap on, the short or medium term, either. The argument is that Amazon then divvies up the 70 per cent with a wireless distribution partner. But traditionally in physical retail, the distributor and retailer rarely gets more than 30 per cent. Amazon and the carriers just don't add enough value to justify the 70 per cent - while you can still use any ISP to browse for free. But that might soon change. 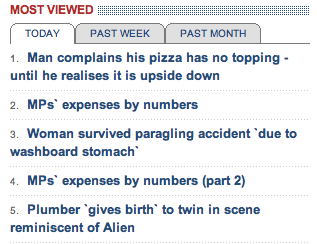 Rupert Murdoch is finally waking up to the realisation that he was bamboozled by the Web 2.0 kids. Like the other newspaper publishers, he spent a fortune in the race to get the material on the web, with sod all return for the investment. He told a conference call last week that he'll begin charging for web access within the year. ®

A bumper mailbag from last week's piece - thank you - keep the Comments coming.

With their near-identical layouts, their ubiquitous use of Georgia, and insistence on using a 2005-vintage pastel colour palette, you could argue they've chucked away their branding already. Compare and contrast (if you can) the Mail, the Times, the Stenograph and the Grauniad. Are they the same paper? Well done, chaps.