Roll your own, then advertise

Open Hack Day Big, purple, and old, the Yahoo! bus parked outside this weekend's Open Hack Day venue in London looked like a survivor from a bygone era. So too, Yahoo!?

Yahoo! remains a web giant, the second most visited web destination after Google, according to both comScore and Alexa, and second only to Google in search engine share.

On the other hand, in search, Yahoo! comes second by a long way, according to Nielsen online (warning: PDF) and Net Applications. Yahoo! also struggles for attention. It might be famous for rebuffing Microsoft's proposed purchase last year, but when it comes to trendy topics like cloud computing, or the social web, Google, Amazon, Facebook and Twitter are talked about more.

So why should anybody, especially developers, care about Yahoo!? At Hack Day, I spoke to co-founder and joint Chief Yahoo! David Filo, and senior director Cody Simms who works on the Yahoo! Open Strategy (YOS) to find out what Yahoo!'s working on to ensure it remains relevant.

For Simms, the thing people should be looking out for is YOS, which he describes as three different platforms.

"One is a social platform which unifies a user profile and user relationships across Yahoo! and creates a user-generated content syndication tool called Yahoo! updates. Any site on the web can ask a user for permission to access their profile and relationships, and to submit events back into Yahoo!. If you leave a comment on a blog, you can syndicate that comment into Yahoo! and I would see it in my mail experience as something you did," he said. 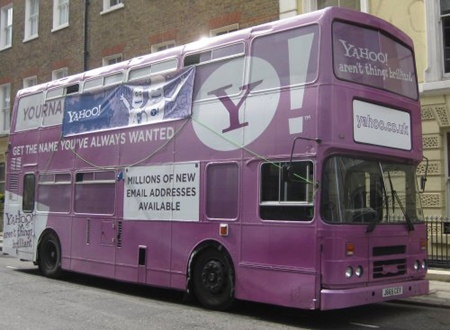 Solid and dependable? Or beaten and past it? Yahoo! on wheels

"Our application platform is how third parties write rich applications and have them run on Yahoo.com. That's what we're rolling out to the mainstream this summer.

"Finally, YQL [Yahoo! Query Language] is a tool for easily accessing data from Yahoo! and from the rest of the web. That's YOS."

YQL is clever stuff. Created by the same team that did Pipes, YQL is a SQL-like language for querying data either from Yahoo! properties such as Flickr and Search, or across the entire web. Data sources are represented as tables, with a table called HTML enabling screen-scrape of any web page. A new feature called YQL Execute lets you manipulate results with Javascript running on Yahoo!'s servers. " As far as I know, there' s really nothing else out there like that today," says Filo.

Another hot topic at Open Hack Day was BOSS - Build your Own Search Service. This is programmatic web search with extra features, such as Search Monkey, which looks for semantic markup in the form of microformats. "Google and Microsoft have some limited APIs but if you want a real web index that is competitive with anything that's out there you have one place to go and that's BOSS today," Filo claims.

Yahoo!'s technology is impressive, as is its commitment to open identity and authentication via OpenID and OAuth. The tough question: Is smart technology enough to dent Google's market share?

"We think the open piece is a big part of the strategy of how we disrupt that marketplace," says Filo. "Opening up this infrastructure that we've built over the years, and allowing other people to build on top of it. Five years from now, ten years from now, search is going to look very different than it does today. It will become more personalized, it will become more social...we think we are well positioned to be disruptive."

What's happening with Flickr? "We continue to invest in it, we've added video to it recently, on the photo side it's been very successful and continues to do very well," says Filo.

But does it make money? "We continue to have both advertising and premium models there and we're happy with that. It's not just about the direct revenue, but it's the other benefits that we derive from it because of integration into the Yahoo! network."

Business models are under scrutiny in the global downturn. Will Yahoo! always be funded mainly by advertising? "People vote with their eyeballs, there hasn't been a lot of appetite for premium content," Filo replies. "That may change, but for the foreseeable future advertising is going to be the driving force. Anything we've done in the past shows that the mass consumers out there tend to gravitate towards the free things that are ad-supported."

The opportunity for developers is that they can build Facebook-like applications that are available to Yahoo! users as well as incorporating Yahoo! services such as BOSS and YQL into external web applications. Other services include Fire Eagle for location-aware applications, Blueprint for creating web sites for mobile devices that automatically adapt to the current client, and the YUI JavaScript library for AJAX applications.

"We have to innovate as quickly as we can, try to build the best experiences that we can, and do that in a better way than our competitors," Filo says.

Open Hack Day certainly showcased some impressive technology. The question is whether Yahoo! still has the marketing muscle to reverse its declining influence and to truly unsettle the likes of Google and Facebook and disrupt the market. ®