Topflight archaeologists have unearthed a 35,000-year-old figurine carved out of mammoth ivory by prehistoric Germans, depicting a woman with enormous breasts. The find is thought to be the oldest known example of 3D pornography in the world. 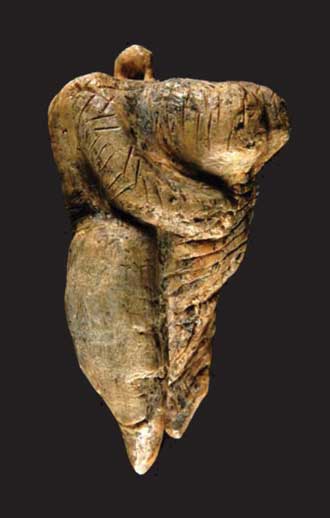 The find was made in the Hohle Fels Cave in the Swabian Jura area of southwest Germany last year, by Nicholas Conard of Tübingen Uni. He believes that the jubtastic relic is at least 5,000 years older than previously-discovered busty nude cavewoman themed objets d'art, and perhaps indicates that the desire to goggle at saucy imagery of ladies well-furnished in the tophamper department is a basic attribute of modern humanity.

"It's sexually exaggerated to the point of being pornographic," comments anthro prof Paul Mellars of Cambridge. "There's all this sexual symbolism bubbling up in that period. They were sex-mad."

If Conard's dates are correct, the smut-hungry prehistoric proto-Germans were in the process of ethnically cleansing Europe of their Neanderthal rivals at the time the bounteously-torso'd figurine was crafted. Experts in prehistoric jub-themed erotica worldwide are now hotly debating the findings: some argue that a taste for copiously convex feminine imagery indicates a superior cognitive intelligence, possibly a conclusive advantage in a contest against Neanderthal dullards. Other professors with wide expertise in the field disagree.

So far at least, it isn't known what (if any) kinds of special-interest gentlemen's glossy portable statuary were favoured by the Neanderthals. Thus the acrimonious debate regarding what pornography preferences are most favourable in a species-dominance context remains unsettled.