Touchscreen, keypad and a killer camera, but where's the WiFi?

Although its lack of Wi-Fi is an obvious omission, the HSDPA-powered NetFront V3.5 mobile browser does a reasonable job at getting around web pages. It renders pages pretty quickly, and offers a selection of onscreen touch tools to negotiate the browser. Yet it’s nowhere near as slick as the iPhone’s Safari experience. Zooming is done by tap and drag, or using the side volume keys and pages can be viewed full screen in landscape, and moved with some finger dragging action, so it is serviceable. 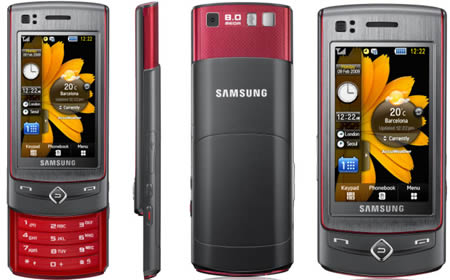 Bundled with Google apps, the A-GPS system integrates with Maps

Samsung has pre-loaded a selection of Google apps, including Mail, Search and Maps – a touch-tailored version of this useful application that combines neatly with the phone’s A-GPS satellite location-finding gadgetry. Apart from geo-tagging, this is the only out-of-the-box GPS app included – there’s no full Satnav software supplied. Overall, the A-GPS technology was responsive and quick to locate our position. The touch user interface of the app was intuitive too, and was nippy at re-loading with new positioning data.

Standard issue organiser tools are at your fingertips; calendar, memo, tasks, world clock, calculator, and converter apps plus voice reorder, timer, stopwatch and RSS reader are to hand and simple to use with either touch control or keypad. Another feature you can try is Fake Call, which rings your phone with a bogus incoming call, giving you the excuse to duck out of conversations, meetings, and so on.

Bells and whistles aside, Samsung gets top marks for this phone’s basic voice calling performance, which was consistently excellent throughout our tests. The Tocco Ultra clocks up an average battery life with Samsung estimating an optimum talktime of up to 4 hours or 300 hours of standby time. We managed around 2 days between charges with typical use. However, mileage will vary depending on your fondness for power hungry features.

Combining touchscreen and slider design principles, the Samsung Tocco Ultra Edition adds some extra text-tapping usability to the touch format without bloating the device. It still manages to feel comfortable to handle, and pleasing to use. Its user interface isn’t as elegantly smooth and sophisticated as the iPhone’s benchmark set-up – and like most touch devices, some elements take a little getting used to.

But Samsung has produced something that’s attractive, and that has little touch fussiness in day-to-day operation. It has a decent spread of features, but the lack of Wi-Fi is a drawback. While the versatile 8Mp camera certainly puts this touchscreen device at the upper end of the cameraphone scale. Anyone looking for an eye-catching, text-friendly touchscreen phone should definitely Tocco look. ®