Astronauts Andrew Feustel and John Grunsfeld ealier today completed the fifth and final spacewalk of the STS-125 mission to the Hubble Space Telescope. 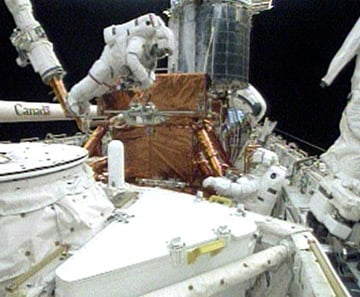 The mission specialists (see pic: Grunsfeld at left preparing to ride the shuttle's robotic arm) exited Atlantis at 12:20 GMT, armed with the final set of replacement batteries and a replacement fine guidance sensor - one of three which "provide pointing information and also serve as a scientific instrument for determining precise position and motion of stars".

The battery unit was fitted in around one-and-a-half hours, followed by the fine guidance sensor - neither of which presented problems for the two spacewalkers.

Four of the the stainless steel foil-coated covers were attached during previous servicing missions. Mike Good and Mike Massimo were due to fit one during the fourth spacewalk on Sunday, but a stubborn bolt meant there wasn't enough time. NASA managed to jiggle Feustel and Grunsfeld's schedule to allow them to finish the job today.

Outside the airlock hatch, Grunsfeld said, "This is a really tremendous adventure that we’ve been on, a very challenging mission. Hubble isn’t just a satellite - it’s about humanity’s quest for knowledge."

The venerable eye in the sky should, all being well, now be in good shape to keep working until at least 2014. It will be released from Atlantis's cargo bay tomorrow, ahead of the shuttle's return to terra firma on Friday. ®