Welcome to the internet, Stephen

Check out the nerd appeal

Clearly, there wasn't such a hype about re-published data. Alpha can do some nifty nerd shit too. Check this out: 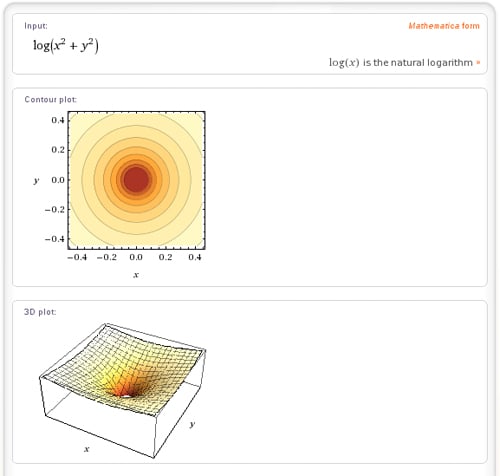 I put "ln(x^2 + y^2)" into Alpha, and out came a couple of graphs, and a host of other information about this expression. I get the roots, Taylor series expansion, derivative, integral, and a few other representations. Hear that? It's the sound of a million college calculus students spinning up Alpha on their iPhones during a midterm. Okay, so Wolfram has cornered an area of the market that doesn't have any drive to succeed or any money. Match, set, point.

This mathematical victory actually gave me hope that Alpha might be able to do something useful for me. As an engineer, I've run across a few instances where I need a way to do some faster math in my code. For example, there's a way of computing an inverse square root called the fast inverse square root. It's been mistakenly attributed to Id Software's John Carmack, (who, by the way, is a genuine genius and doesn't need to self-publish a book to prove it to himself), and it uses Newton's method to compute an approximation of the inverse square root using integer operations, which is way faster than using floating point operations. Being a good love child of math and computer science, maybe Alpha has some information on it.

Nope, no dice. "Wolfram|Alpha isn't sure what to do with your input." Ah yes, the chorus of mediocrity. Funny, though. There's a good Wikipedia page on this algorithm.

What about just "square root"? 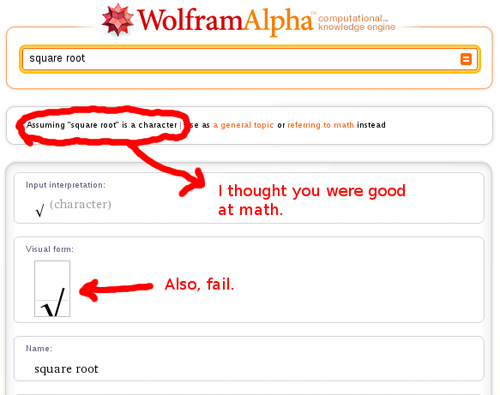 Is this a serious attempt at anything? Thanks for that, Dr. Science.

All of these strikeouts aside, my absolute favorite part about Alpha is the result you get when you search it for itself: 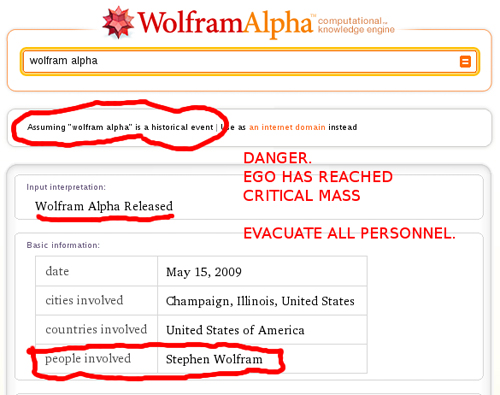 This guy either got too many wedgies or not enough wedgies as a child.

Stephen Wolfram's arrogance fuels his belief that he can make money in the consumer web space by applying raw intelligence. Granted, there is a lot of good engineering behind Alpha, but having the best engineers in the world doesn't mean that your product is going to be a winner. Alpha is trying to win page views in a space where Twitter has proven that your average user's attention span maxes out at 140 characters. It's times like this where the internet's abundant anti-intellectualism actually does some good for the world. Cutting down Wolfram-sized ego is worth a thousand 4chans.

Like any web product, it's unclear what Alpha's business plan is. Are they going to serve ads against these search results? Are they going to charge for usage? Is it a ploy to sell more copies of Mathematica? If it really is as advanced as Wolfram makes it out to be, then there has been significant capital expenditure in developing it. You're not going to beat Google at ads, no matter how smart you think you are. People aren't going to pay for this service, at least not enough to turn a profit. The justice of fail is swift and decisive.

Welcome to the internet, Stephen. It's a New Kind of Market. Clearly none of us are intelligent enough to understand the sheer brilliance behind your idea. That face you see us making is dumbstruck awe, no matter how much you think it looks like contempt. Really. ®

Ted Dziuba is a co-founder at Milo.com You can read his regular Reg column, Fail and You, every other Monday.

Fear not! A swift sudo and your computational prayers will be answered

Mathematica will be baked into future Raspbian releases

Come in Google, your time is up. Watson, we're watching you

'It becomes trivial to write a program'

Whoa, hold on, Earth: Wolfram's discovered the 'Internet of Things'