Reviewing and profiling your code is boring? Well, Amazon will now sell you an AI editor to do it for you

Amazon continued its drive to make every iPhone user an Amazon customer by releasing an update to its free Kindle for iPhone app on Wednesday.

The new Kindle for iPhone 1.1 (iTunes link) adds a few welcome features, but it's notable more as a signal that Amazon is taking ebooks quite seriously indeed. But so is Google.

Version 1.1 adds a landscape mode; the choice of white, black, or sepia as a background color; a tap-to-turn page-advance option; and the ability to resize images with a pinch. 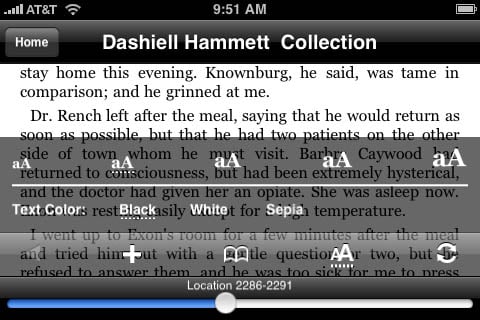 Options are easier to select in landscape mode

Once nicety is a wee lock icon that appears briefly when you switch into or out of landscape mode - tap it, and the viewing mode stays the same no matter how your turn your iPhone or iPod touch. It will appear again briefly when you rotate the device - just tap again to unlock.

Although the sepia background might be considered mere eye candy, the white-on-black text option is a boon to those who read in bed and find themselves blinded by the glare of a white background. Trust me on that one - I speak from experience. 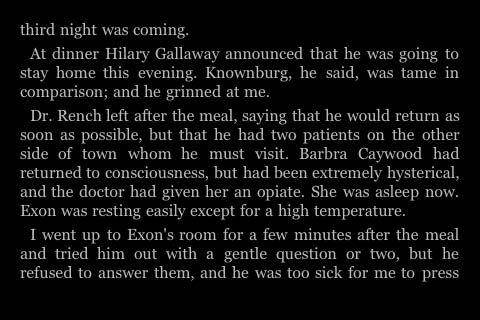 The release of version 1.1 comes just three weeks after Amazon acquired ebook-software publisher Lexcycle, maker of the popular Stanza (iTunes link) reader. Some of the new features mimic those in Stanza, such as landscape mode, the tap-to-turn ability, and background colors - although Stanza has a far richer set of background choices than does the updated Kindle.

In fact, Stanza has a far richer set of almost everything than does Kindle, including pinch-able font-size changes, justification and paragraph-spacing controls, a choice of page-turn animations, and more. Expect to see some of these options show up in future versions of Kindle for iPhone. 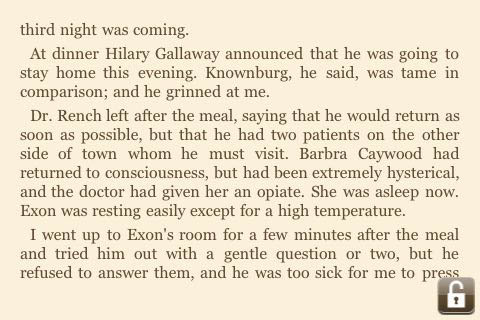 Lockable viewing modes are a gift from Stanza

Amazon clearly sees money to be made in ebooks - a technology that sputtered into life over two decades ago with the release of the Franklin ebook, but which didn't catch fire until Amazon released its first Kindle in late 2007.

The first Kindle was bulky and expensive, however, earning only a small but devoted following. Amazon kept at it, though, releasing the vastly improved Kindle 2, then the wide-screen Kindle DX.

But dedicated book-reading devices will only take Amazon so far. The real money is to be made in selling content for existing devices such as the iPhone and iPod touch - and so Amazon followed the release of the Kindle DX with the Kindle for iPhone 1.0 app, which was released in early March. Then less than two weeks ago, Amazon iPhonified its book-selling service, making books-on-the-go an impulse buy.

As welcome as these developments are for those of us who prefer to read during our subway commute rather than listen to the latest from Lady Gaga, we also see a confrontation brewing on the horizon. As The Reg has oft mentioned, Google is busily locking up all the books it can consume, with the apparent goal of becoming the world's monopolizer of printed content.

Amazon and Google are sure to tangle. In fact, the first shots in that battle have already been fired. ®