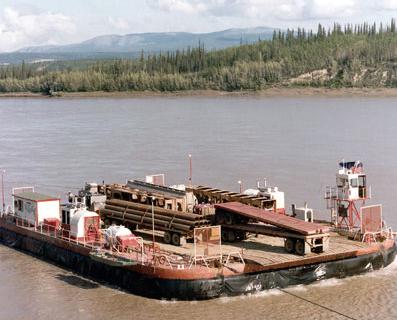 Fort McMurray Today reports from a transportation planning meeting hosted in Alberta by energy companies and local government, seeking to find ways to get access for oil exploitation to remote areas. The Alberta provincial government estimates that there are oil reserves of 173 billion barrels accessible with today's technology in the region, and is understandably interested in getting them out.

But it could be easier and cheaper to bring in mostly prefabricated, modular plants and pipelines - if you could move really heavy loads into the interior of Alberta. It wouldn't make sense to build even bigger roads for more or less one-off use, though: which is where radical transport ideas come in.

One ploy that might do the job is the use of "hoverbarges", essentially very large hovercraft, to bring the new oil plants. Normal barges able to carry hundreds of tonnes would need a certain minimum depth of water, but a hover barge needs only a reasonably flat surface. It laughs at mud or sand banks, shallows, swamps and even quicksand - a loaded hoverbarge's ground pressure (one pound per square inch) is much less than a human's.

Stuart Turner of Southampton-based Hovertrans says that a 200-tonne hoverbarge can drive over eggs without breaking them. His company offers designs capable of carrying loads up to 2500 tonnes, though they can only be self-propelled up to 200 tonnes. Above that they need to use some form of surface traction, usually supplied by a towing or pushing vehicle or vessel - though there's a "bolt-on" kit too.

Turner told Fort McMurray Today that hoverbarges were used back in the 1970s on the Yukon river, and they could easily haul in prefabricated oilsand rigs up Alberta's Athabasca river.

Next page: Hover barge? Pah. You want an airship. Or a SkyHook.
Page: