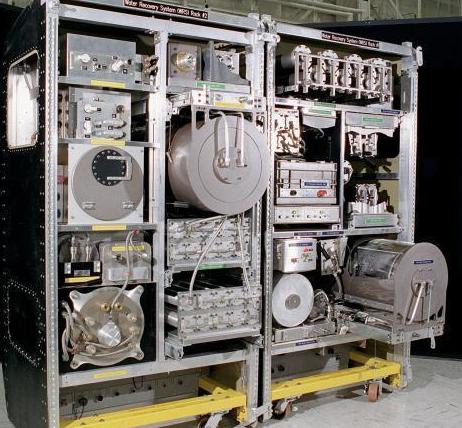 A quarter of a billion dollars quite literally pissed away.

"We have completely checked out the system from end to end," NASA life-support chief Marybeth Edeen told Space.com.

Astronaut Don Pettit, who has himself struggled to repair the station's defective re-wee equipment during a visit aboard the shuttle Endeavour last year, exchanged toasts with the current ISS crew from Houston.

"We're getting ready to toast with some of yesterday's coffee with you guys," he said, according to Space.com.

Quick as a flash, chortling drinkers on the station replied.

"We're going to be drinking yesterday's coffee frequently up here, and happy to do it," said mission-specialist and flight surgeon Dr Mike Barratt.

According to the report, the station's urine harvesting gear is now running smoothly, reprocessing sweat from the air and liquid from the lavatories into potable water used for drinking, cooking, oxygen generation through electrolysis and "bathing".

Regarding that last, there is a zero-G shower stall on the ISS - now presumably to be renamed "Golden" - although it seems that actually most astronauts prefer to take sponge baths, showering in microgravity being a troublesome procedure. (You have to wear a breathing rig to avoid inhalation of floating water droplets and choking; and it's the devil's business trying to get the water first onto yourself, and then off again afterwards.)

In any case, everyone at NASA and the other ISS space agencies is, erm, bathed in gratification at the piss-processing triumph. The station is shortly to man up to six-person crews instead of just three, and at the same time it will soon lose the chance to top off its water tanks from visiting space shuttles. The shuttles produce useful quantities of water as exhaust products from their fuel-cell powered electrical systems: this isn't the case with the Russian and European supply capsules which will sustain the ISS after the shuttles retire.

"It was wonderful," an emotional Edeen told Space.com following the ceremonial quaffage. "It really is the culmination of maybe a decade of work to make this happen." ®

Not only will ISS astronauts be drinking their own and their crewmates' recycled sweat, breath-moisture and urine - they'll also be drinking rat piss. Seriously: according to NASA, even the experimental animals aboard the station will have their waste liquid recovered.

"A full complement of 72 rats would equal about one human in terms of water reclamation," says the space agency's Layne Carter. ®