MIPs on the cheap

With the US Memorial Day holiday behind us, IT vendors can get down to business for a month or two before everyone prepares to go on summer holiday and try to forget the economic downturn for a while. Server maker Unisys is the first out of the chute with new iron today, launching three new ClearPath mainframes that offer more MIPS for less money.

Well, less money that last year's mainframes. Mainframe pricing is a but of a time machine compared to the cost of computing capacity on alternative RISC/Unix and x64 platforms, but mainframes are no less immune to the effect of Moore's Law than any computing platform. It is just that the legacy nature of the applications running on mainframes - they're old, they work, and they're difficult to move - allows IBM, Unisys, Fujitsu, NEC, and Hitachi to charge a lot more for capacity than would be justifiable in a world where mainframes directly compete against Unix boxes because they ran the same code.

The legacy nature of that code means governments and big banks - the kind of stodgy operations that are sometimes slow to embrace change in IT operations - means that gimmicks that have already stopped working (or never worked in the first place) can be used in a mainframe launch. A case in point: the 24-hour mainframe launch event that Unisys is hosting in Second Life.

"No need for expensive travel," says the invitation to the Second Life event. "Instead, transport yourself virtually to an Alpine Executive Center. Interact with your peers and Unisys experts. Assume a new identity. Ride hot air balloons. Skate with mainframes on the pond. Cavort in a world where the adventure is virtual and the news of one of the most important announcements in the distinguished history of Unisys ClearPath servers is real." 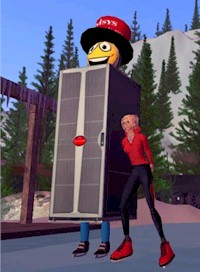 I think it would be much more interesting to trip the mainframe with a karate move and then play a game of curling with it. (Can you buy a broom cheap in Second Life?) In the meantime, we'll just stick to the feeds and speeds and prices of the new iron.

The three new mainframes - one in the ClearPath Libra line and two in the ClearPath Dorado line - come in the wake of a series of mainframe announcements that Unisys made back in October. Unisys, of course, is the result of the merger of the Burroughs and Sperry mainframe businesses, and the Libra products run Burroughs' MCP operating system and the Dorado line runs Sperry's OS 2200 operating system.

At this point, the mainframes share much of the same technology with each other as well as with Unisys' ES7000 high-end Xeon and Itanium iron, although Unisys is still designing and tweaking its own CMOS mainframe engines for the MCP and OS 2200 iron and intends to keep doing that because mainframes drive a lot of sales at the company, indirectly more than directly as it turns out. (IBM's Microelectronics division is the foundry for mainframe engines created by Unisys, and the current CMOS mainframe engines are dual-core processors).

That said, Unisys has ported MCP to run atop Windows on Xeon engines many years ago, and in 2007, Unisys delivered a variant of OS 2200 running atop a Linux kernel that in turn runs on Xeon iron. Last fall, the Dorado (OS 2200) line got a dual-core CMOS mainframe engine rated at 525 MIPS (apparently over a pair of cores) and providing 5,700 MIPS of aggregate computing capacity with 32 cores (that's eight two-socket cell boards, or 16 processors in the Unisys lingo) in a single system image. These engines went into the Dorado 780/790 series.

The new Libra (MCP) line is getting a similar upgrade today with its own 780/790 models, with its own dual-core mainframe engine rated at 520 MIPS and having an aggregate of 5,500 MIPS in a single image that spans up to 16 cores. That 520 MIPS rating seems to be for a single core (not a pair as in the Dorado line), and the machine has one, two, or four cell boards.

On an engine-by-engine basis, Unisys says that the Libra 780/790 machine has about 10 per cent more oomph over the prior ClearPath Libra 680/690 models, and with some modest price cuts for capacity and the use of low-cost specialty co-processor engines like IBM has on its System z mainframes, Unisys is able to make a compelling enough economic case for keeping applications running natively on real mainframes for this to still be a business.

By the way, Unisys was on the front end of utility computing, pay-per-user wave early in this new century, and the difference between X80 and X90 models in either mainframe line is the way they are priced. The X80 models are regular machines with list pricing that lets customers acquire the full capacity of the configuration they buy, while the X90 models come with all the processors, memory, and I/O cards in the box and have metered pricing.

Bill Maclean, vice president of ClearPath programs at Unisys, says that depending on the model, somewhere between 70 and 80 per cent of mainframes that are shipped today have metered pricing because customers only want to pay for what they use. That said, there are still a few shops that always buy the biggest mainframe they can and are willing to amortize the costs across a long period (and it stands to reason that this is still the cheapest way to get MIPS provided that the machine is running at very high utilization).

Next page: Add Xeon and Linux as needed
Page: