Astronomy boffins say they have developed new techniques which could use the space telescopes of tomorrow to detect oceans on alien worlds orbiting other suns. 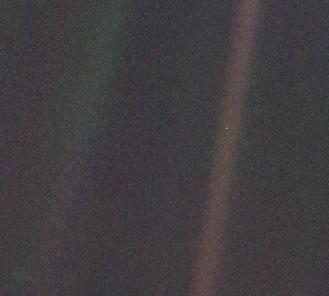 Earth as an alien invasion/harvest fleet would see it.

As all regular Reg readers will be aware, new telescope satellites now going into space are expected to discover large numbers of small, Earthlike planets in distant star systems. Some of these terrestrial-sized worlds are expected to be found orbiting at such a distance from their suns that liquid water could exist on their surface.

Liquid water is seen by most scientists as a prerequisite for the existence of alien life - at any rate, alien life of the same general sort as that on Earth; life which would be interesting on more than just an intellectual level. Hence the interest in finding liquid water elsewhere in the universe.

But simply finding a world on whose surface liquid water could exist without immediately boiling or freezing doesn't mean that there actually is any water there. And on the face of it, even the new space 'scopes now coming into service won't confirm the presence or absence of water. All they'll show, according to astronomers, is a "pale blue dot" less than one pixel in size, just as Earth itself appears when viewed from such far-ranging spacecraft as the Voyager probe (see pic).

The dot is pale blue for the same reason the daylit sky seems pale blue to us - scattering of sunlight by the atmosphere. Normally it's pretty difficult to tell from a single blue pixel whether or not any watery oceans lie beneath a planet's atmosphere, even if you know that it's theoretically possible for them to be there.

NASA boffins and their colleagues believe they've cracked this problem in advance, however, using images of Earth sent back from the Deep Impact comet probe, now on an extended mission in the outer reaches of our solar system.

"A 'pale blue dot' is the best picture we will get of an Earth-like extrasolar world using even the most advanced telescopes planned for the next couple decades," says Nicolas Cowan of the University of Washington. "So how do we find out if it is capable of supporting life? If we can determine that the planet has oceans of liquid water, it greatly increases the likelihood that it supports life. We used the High Resolution Imager telescope on Deep Impact to look at Earth from tens of millions of miles away - an 'alien' point of view - and developed a method to indicate the presence of oceans by analyzing how Earth's light changes as the planet rotates. This method can be used to identify extrasolar ocean-bearing Earths."

It seems that if you look at the right wavelengths it's possible to detect changes in an ocean-bearing planet's image as it rotates, even though different parts of the planet can't be distinguished from each other. The technique isn't perfect, apparently:

"We could erroneously see the planet as a desert world if it had a nearly solid band of continents around its equator and oceans at its poles," says Cowan. "[And] there are some weird scenarios you can dream up that don't involve oceans but would lead to varying patches of blue on a planet, but these are not very plausible."

The other snag with the new extraterrestrial ocean-spotting scheme is that it won't work with the present state of space telescope technology. It works fine using the Deep Impact scope to look at Earth, but over interstellar distances you'd need a scope better than anything now available. However, Cowan and chums believe that suitable kit will arrive in ten years or so, by which time there should be a fair number of known potentially-watery planets to check out.