Three more crew members boarded the International Space Station today from a Russian Soyuz capsule, doubling its permanent crew to six for the first time ever.

Unlike previous expeditions, existing ISS residents, commander Gennady Padalka of Russia, American Michael Barratt, and Japan's Koichi Wakata will stay aboard until October rather than immediately return to terra firma.

The capsule's hatches were opened less than two hours after docking, marking the first time each the of the space station's international partner agencies were simultaneously aboard. 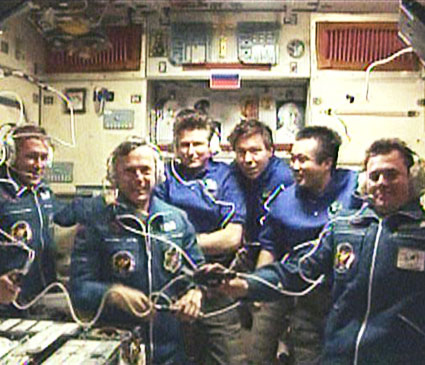 A welcome ceremony followed by a safety briefing greeted the new crew members. (In case of emergency 1) cower in the Soyuz module 2) try to remember wetting your astro-pants is a waste of good drinking water).

Space boffins say keeping only three crew members aloft in the ISS wasn't enough to keep up maintenance as well as carry out scientific research. A sextet should ease the burden, although make for a much more crowded house.

When commander Padalka's crew disembarks for Earth on October 11, De Winne will become the station commander, marking the first time a European has helmed the orbit outpost. ®