Catalogues every rumour ever made, pretty much

Rumours about which features may be added to the third-generation iPhone appear on an almost daily basis, making them very hard to remember. So one iPhone fanatic’s put them all together into a single image. 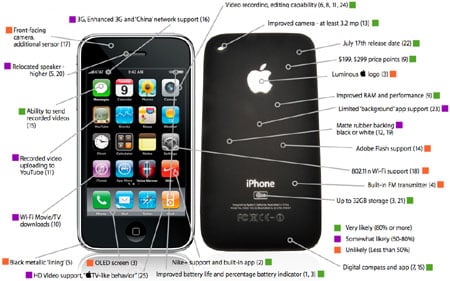 Image courtesy of The Green Room

Blogger Remy’s taken front and back shots of the second-generation iPhone and overlaid callouts of all the numerous features that it’s been previously rumoured could appear on the next model – which it’s widely thought will be unveiled at Apple’s Worldwide Developers Conference (WWDC) next week.

The image (shown above) is pretty self-explanatory, but each rumour’s coded either green, purple or orange according to the likelihood of it being real.

Green signifies rumours with an 80 per cent of more chance of accuracy, while purple takes the rumour down to 50 – 80 per cent and orange to less than 50 per cent.

FYI, the numbers beside each rumour are references to where it appeared from.

Take the predictions with a pinch of salt, though, because Remy’s predictions are only based on his own opinions. ®