Fireworks experts will this morning perhaps unwisely unleash a replica Great Panjandrum on the beach at Westward Ho! in North Devon - recreating the original tests of the rocket-powered wheel which sadly did not contribute to the 1944 allied landings at Normandy. 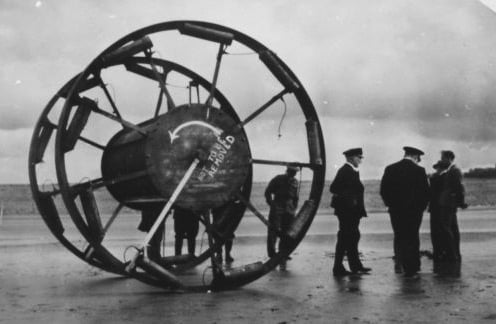 The Great Panjandrum was intended to thunder up the invasion beaches, cutting a swathe through German defences before detonating a ton of high explosive. It was, the Times notes, devised by naval lieutenant Nevil Shute Norway, later known as novelist Nevil Shute.

Shute Norway had worked with Barnes Wallis, but his top-secret Panjandrum failed to make the impact of the bouncing bomb. He'd calculated the beast would charge at "60mph on its two 10ft diameter steel wheels, smashing its way through any obstacles, before blasting a hole in the 7ft concrete of the Atlantic Wall large enough to drive a tank through".

Unfortunately, during not-so-secret tests at Westward Ho! in 1944, enjoyed by large crowds of locals and holidaymakers, the Great Panjandrum resolutely refused to follow a straight line.

Every time the cordite rockets were fired up, it simply veered off to one side. Shute and his team spent weeks tackling this problem, before assembling military top brass for a final demonstration. The Great Panjandrum failed to secure a place on the D-Day invasion fleet by once again careering wildly off course before exploding.

The 7ft diameter replica which will today menace Westward Ho! was constructed by Bristol fireworks company Skyburst, which reckons it'll trundle up to 550 yards at a modest 15mph.

Skyburst’s display director, Leigh Pittaway, insisted the Great Panjandrum would not be used to blow a big hole in the Westward Ho! seafront, and would be unarmed. He said: “We thought about it, as we have the whole beach to ourselves, but decided it would create too many complications. We don’t want to kill any dogs or onlookers.”

There's some footage of the original Great Panjandrum, along with other ill-conceived British military gadgets here. ®

The Great Panjandrum was named after the Samuel Foote poem of the same name.