Ray Ozzie told the Churchill Club in California last week that Wave violates a principle he currently holds dear - that complexity is the enemy of the web.

Ozzie said the open web relies on open data formats and protocols, not opaque packages and payloads being tunneled across the web - yes, that was Microsoft saying that.

He did not explain exactly how he believed Wave to be complex. Instead he suggested that Wave would rely on open source - because without it, Google's collaboration platform would be too complicated for those outside the company to implement.

"I have nothing but the highest degree of sincere respect for the people who took this on," Ozzie told a Churchill Club dinner event on Thursday evening.

But "if you have something that by its very nature...is very complex with many roles and the way you configure it...then you need open source to have many instances of it because no one will be able to do an independent implementation of it," Ozzie said. 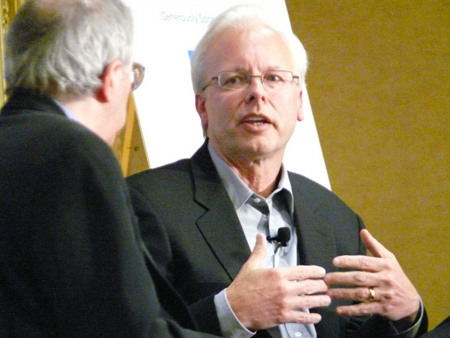 Ozzie, the collaboration pioneer: hopes "we" learn a lot from Wave

He contrasted Wave with Microsoft's work on Mesh, which is currently in beta. This features a framework to store data such as contacts, email, documents, or photos and will synchronize with devices via extensions to RSS- and Atom-based engines.

Mesh is expected as part of Microsoft's Azure cloud later this year.

"Google Wave and Mesh are basically the same thing," Ozzie claimed. "But the nature of Mesh was learning from Groove and saying you are going to do synchronization, you are going to distill it down to simple things that people can do independent implementations of. So it's all based on RSS."

Ozzie is regarded as a pioneer in collaboration. He invented Lotus Notes, that staple of enterprise collaboration now owned by IBM. He also created Groove Networks for people to create online workspaces and share documents. Groove was acquired by Microsoft in 2005 and went on to become Microsoft Office SharePoint Workspace.

Next page: Exchange of ideas
Page: