And so to the digital stills camera that the 5D MkII truly is, now touting 21Mp, up from 12.8Mp. The continuous shooting at 3.9 f/s is not so groundbreaking, with higher speeds still reserved for the flagship 1D models. However, the menus are better laid out and there are more of them and you can now use the joystick top right to move between them. Memorise the colour coding and you can jump quickly to the submenu for that feature.

A great improvement is the quick jump function to access frequently used features without having to go through the menus – simply press the SET button. While experienced EOS users are habitually view function settings from the top screen, now, parameters can be gleaned from the back LCD. 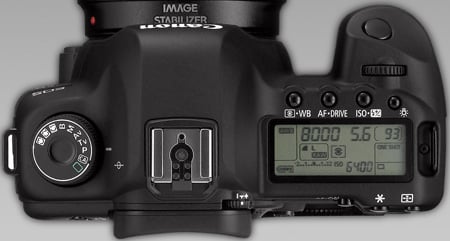 Old hands use the top panel for settings, but the LCD back shows them too

The Program selection knob has gained a couple of custom function settings, one being the new Creative Automatic (CA) mode. It’s a halfway house from full auto to something akin to testing the water. It will appeal to casual users to take control over things like aperture, shutter and white balance to see what effect they have.

Anyone having used not just Canon SLRs since the Nineties will feel right at home with the program, aperture and shutter priority options, plus bulb and manual. In fact, little has changed. If you’ve used the 5D Mk I, you can pick this up and shoot immediately.

On the left are connectors for PC sync for studio flash, mini HDMI, mic input, USB, and another AV connector. The batteries have been upgraded, so no using your old 5D or, come to think of it, any Canon SLR batteries of the last seven years. Canon did very well being so consistent with those! Battery life is very good when shooting stills, less so with heavy amounts of filming and playback.

The larger 3in, 920,000-pixel screen is four times the count of the original 5D's 2.5in display. Suffice to say, if it looks good on the back it is good. Although, sometimes the auto view mode, that shows what’s been captured, can dip in intensity in sunlight, which can seem as if it's losing power. However, all things are customisable, but changing the brightness of the screen can give false hope to incorrect exposures, so there are histograms for both overall brightness and separate RGB levels for reference.

The white balance can be changed within bracketing as well as from the menu, giving three different looks in a sequence. There is also the ability to make one custom white balance, if you know you are going to be in a very complicated mixed lighting situation.