Boot me up, shut me down

One of the Fedora Project's major goals for this release was to make boot and shutdown times much faster. Fedora 11 claims to be at the login screen in 20 seconds. In my testing, Fedora 11 actually beat the goal by a couple of seconds and shutting down was even faster, usually taking just over 10 seconds to power the system off.

Much of the speed gain at boot was made possible by removing what the Fedora Project refers to as "bloated tasks" from the boot process. I was a little suspicious that those might have been handed off after login - meaning to the GNOME-session - but thankfully, logging into GNOME is just as quick as ever.

There's also a grab bag of smaller improvements in Fedora 11, like a better out-of-the-box experience for systems with fingerprint readers, stronger hashes (SHA-2, rather than just MD5 or SHA-1), and a new way for desktop programs to automatically install items such as applications, fonts, and multimedia codecs.

Developers will be happy to know that the latest version of Fedora ships with a number of improved tools including GCC 4.4 and even Python 2.6.

As for the applications, Fedora includes Firefox 3.5 - although it was still labeled as 3.1b3 in the preview release - the new OpenOffice 3.1, Rhythmbox, and a few of the other usual GNOME suspects like GIMP, the F-Spot photo manager, Pidgin, and Transmission. 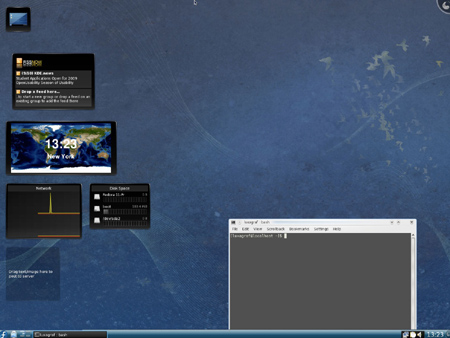 Bit of a looker: KDE in Fedora 11 finally beats GNOME

On the KDE side, you'll find all the improvements of version 4.2 - including support for Plasma widgets, the latest version of Dolphin file manager that has now matched most of Konquerer's feature-set, and updates for the KDE app suite like KMail, Kontact, KDevelop, and KWrite.

I've avoided KDE during the jump from 3.5 to 4.0, but now that 4.2 is here, the four-series KDE desktop finally feels mature enough for everyday use and in many respects - especially the eye-candy - it trumps our old friend GNOME. But KDE did take considerably longer to login to than GNOME. It appears there's a price to pay for the fancy graphics, and you'll likely notice it more with Fedora 11's very short boot times.

Performance-wise, Fedora 11 is plenty snappy. Of course, the speed will vary greatly according to your PC's specs, but aside from the faster boot times - which are very noticeable - I didn't notice a huge change over Fedora 10. I only encountered one persistent bug in the preview release, which would cause the audio subsystem to go haywire every once and while, and hope this has now been fixed.

If you've never given Fedora a try, now is a great time. Not only does the latest version continue Fedora's tradition of slick and stable releases, it packs in enough nice new features to make it well worth the upgrade. And for those who aren't sold on using the ext4 filesystem, it isn't hard to install with ext3.

I would definitely recommend Fedora 11 to anyone using 10, but think it might also be a nice alternative for those growing tired of Ubuntu or just looking to play around with a new Linux distro. ®