Bing 'better' than Google for advertisers

Increasingly, though, it's looking like a search engine really is just a search engine and that there's very little to differentiate Microsoft's Bing from Google - other than one's personal taste.

One user research specialist, though, reckons Bing will offer one important online constituent what they want - eyeballs. They are, of course, advertisers and businesses online.

User Centric claimed that sponsored links attracted a greater amount of users' attention in search results returned in Bing than in Google - 42 per cent versus 25 per cent per search.

User Centric arrived at its findings by tracking search users' eyeballs around web pages in its labs. The eye-tracking generated color-coded heat maps on the screen, with the most intensely viewed areas shown as red - these areas held individual's attention for 4.5 seconds or longer User Centric said. 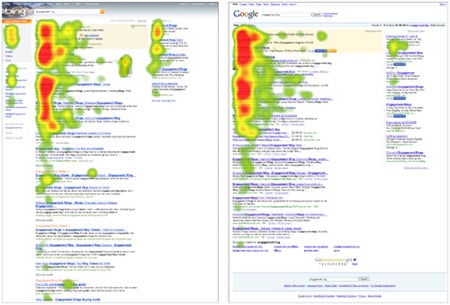 It sounds like there are two things at work here: Bing's vertical search and Bing-optimized categories, combined with the way Bing presents the search results on the screen.

In other areas there was little to differentiate Bing and Google. There was no difference in the amount of attention given to organic search results, with people spending an average of seven seconds in an area, while sponsored links at the top of the page - above search results - also attracted similarly high levels of attention. Ninety per cent looked in this area.

The news will likely please Microsoft, who's done what Microsoft does best: constructed a platform designed with business in mind. Traditionally, that platform has been Windows and the businesses in question were ISV and SI partners building applications on top of it. More recently that's been around Silverlight and Virtual Earth. Now, it's search, and the partners Microsoft hopes to attract are online advertisers and businesses.

It's one thing to construct something for advertisers, though, another to woo users.

For its part, User Centric said it's eye-tracking uses infrared to accurately and unobtrusively capture eye movements. The company said it has applied this technique to the design of other web sites, search engines and portals, and it's been used to test product packaging, medication labels, and email advertising. ®