A 14-year-old student from New York state has become the youngest person in history to discover a supernova. And her find is also one of the most peculiar supernovae spotted to date.

For a massive stellar explosion, this one appears to be a dud.

Additional observations with more powerful telescopes determined the object, dubbed SN 2008ha, is a new type of exploding star, 1000 times more powerful than a nova, but 1000 times weaker than a typical supernova. Scientists say SN 2008ha effectively bridges the gap between the two. 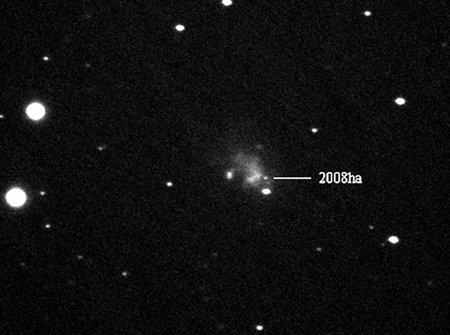 "If a normal supernova is a nuclear bomb, then SN 2008ha is a bunker buster," said Ryan Foley, Clay fellow at the Harvard-Smithsonian Center for Astrophysics and first author on the paper reporting the findings. "From one perspective, this supernova was an underachiever. However, you still wouldn't want to be anywhere near the star when it exploded."

Typical novae are thought to occur on the surface of a white dwarf star in a binary system (two stars orbiting around their common center of mass). If the white dwarf crowds its neighbor enough, it can suck up the gas from the other star. Occasionally, the new material becomes hot enough to start nuclear fusion on the white dwarf's surface — causing the small, dense star to suddenly become extremely bright.

If the white dwarf eats a sufficient amount of its stellar companion, it can raise the star's core temperature enough to ignite runaway nuclear fusion (viz: pop goes the weasel.) This is defined as a type Ia supernova.

"You can imagine many ways for a star to explode that might resemble SN 2008ha," said Robert Kirschner of the Harvard-Smithsonian Center for Astrophysics. "It could have been a massive star suddenly collapsing to form a black hole, with very little energy leaking out. But it looks a lot like its brighter cousins, which we think are nuclear explosions of white dwarfs. Maybe this one was an explosion of that general type, just much, much weaker."

The scientists describe that in a typical supernova explosion, light from the different chemical elements is "smeared" across the electromagnetic spectrum, courtesy the Doppler effect. Moore's SN 2008ha, however, paints a clearer picture because the star shrapnel is traveling at a mere 4.5 million miles per hour, compared to a brisk 22 million mph for a typical supernova. The lets boffins analyze the composition of SN 2008ha to a greater precision.

Astronomers hope the newest generation of telescopes and instruments will spot much more of this type of event in the next few years.

The paper was accepted for publication in the Astronomical Journal and is available here. ®