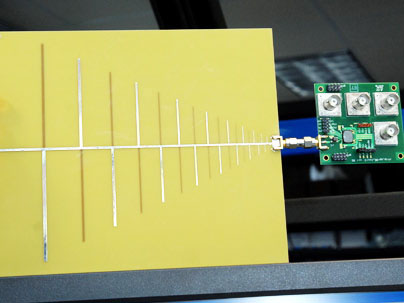 A close-up of the RFC and antenna

Designed by scientists at the Massachusetts Institute of Technology, the RFC’s design is based on the human hear. Your ear contains a spiral structure - the cochlea - in which thousands of tiny hairs enable you to detect different frequencies, from 100Hz to around 10,000Hz.

The RFC detects electromagnetic rather than pressure waves, and its tiny spiral design contains transistors, each of which detect a different radio wave, rather than hairs.

Rahul Sarpeshkar, one of the chip’s designers and an Associate Professor of electrical engineering and computer science at MIT, said the RFC’s extreme sensitivity would make it ideal for use in commercial wireless applications.

He also claimed that the design is 50 times more power efficient than the receiver in a typical mobile phone.

Plans to develop the RFC for commercial use haven’t been announced, but the designers have submitted a patent application to incorporate the RFC into in a gadget for processing a broad spectrum of signals. ®