Lightning Review Apple's iPhone 3.0 Software update went live Wednesday at around 10:00 a.m. Pacific Daylight Time. After a few hours of reviewing its flagship features, I can report that all - well, most - seems to be in order.

After a half-hour download of its 230.1MB bulk over a sputtering DSL connection, I fired up the installation process. Thirteen minutes later, my iPhone 3G was upgraded and its free space had shrunk marginally from 614MB to 605MB.

After my iPhone self-started, I took a trip through Settings, where I discovered a few changes. As widely expected, enhanced parental controls in Settings > General > Restrictions now provide finer-grained control over what Junior can download from both iTunes and the App Store - although a quick survey of the App Store shows that a majority of developers have not yet age-tagged their apps, as Apple's iPhone software chieftain Scott Forrestall asked them to do during the Worldwide Developers Conference keynote last Monday in San Francisco. 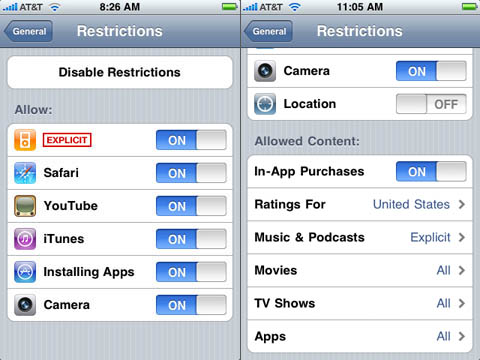 Interestingly, my first trip to Settings > General > About showed that I had zero songs and zero videos on my iPhone - and there had been plenty there before I upgraded. I launched the iPod app to check whether they had, indeed, evaporated, but they were still there. I then went back to About, and the songs and videos were now correctly enumerated. By the way, there's also a new line in About that tells you how many apps you have installed.

The addition of the new Voice Memo app - more on that later - to the first home screen caused a bit of a pain in the butt by moving one of my previous first-screen apps to a new second screen, all by its lonesome. Simply moving that bumped app to the third screen, however, caused the second thus-emptied screen to disappear.

The promised Spotlight search - accessed by swiping left from the first home screen - finds text strings in Notes, Mail, Contacts, Calendar; iPod-tune artists, song, and album names; and more - although you can narrow the areas searched in Settings > General > Home > Search Results. A tap on a document listed in the search results launches the app and opens the doc. Be forewarned, though, that the search includes Mail's Trash. If you haven't cleaned yours out in a while, you will now. 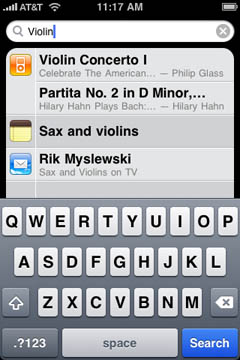 In addition, Spotlight conveniently find apps by name and launches them with a tap on their icon - a blessing to geeks like me with around 100 apps.

The much-ballyhooed cut-copy-paste abilities do indeed work in some third-party text-entry applications - cut-copy-paste worked just fine in WriteRoom but not in ShapeWriter. 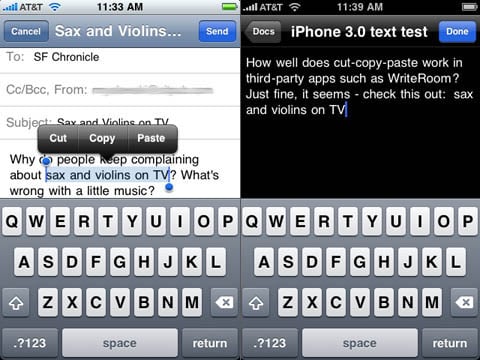 Text from Mail can be pasted into WriteRoom - and vice-versa

However, I found cut-copy-paste to be a finicky, touch-and-go affair. Admittedly, I'm as ham-handed as they come, but after an errant deletion or two, I found myself searching for the Undo button. Couldn't find one. [UPDATE 3:45 PDT: A number of readers have pointed out that an Undo dialog can be invoked by shaking the iPhone. So it can - but that's a dumb UI, IMHO.—RM]

And although cut-copy-paste worked just peachy in Safari, I wish it also worked in apps that simply present rather than edit information - but, alas, I was unable to cut-and-paste Sammy Sosa's steroid-infused 2003 stats from Bulbous Ventures' Baseball Statistics into an email to baseball commissioner Bud Selig. 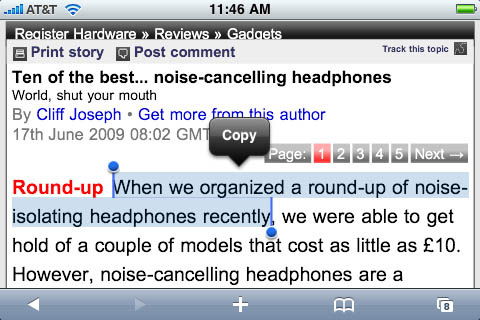 Even when zoomed in, cut-copy-paste works well in Safari