Let the links come to you

Following the (semi-)success of Twitter's self-search engine - meant to tell you what the world is thinking right now - there's no shortage of web-happy outfits scrambling to crack so-called real-time search. That includes everyone from Google and Facebook to Web2.0rhea-loving startups like Tweefind and Twingly. Yes, Tweefind and Twingly.

Collecta falls into the latter category. But its real-time search is a bit more real-time than most.

"The way the web works for http right now is that you have to go and request a page," says chief executive Gerry Campbell, who previously served as president of search and content technologies at Reuters and as senior vp of search for AOL. "With RSS or anything else, you have to go out and ask for that information. But we're getting push feeds."

The WordPress blogging platform, for instance, uses XMPP push. "When anything is published on the WordPress platform - whether it's a blog post or a comment - it's pushed to us immediately. That allows us - from the moment the blogger posts - to get that content to our users in half a second."

The rub is that XMPP is rare among publishers. The list of users includes WordPress, the Iowa State weather site, and, well, that's about it. Collecta is forced to retrieve most content via RSS and other "pull" mechanisms. Naturally, it taps into those Twitter APIs - and Tweets seem to account for a healthy portion of its results. "We have an unlimited number of feeds we're pulling in with traditional means," Campbell says.

But other publishers are pushing data to Collecta via non-XMPP protocols, including file transfer protocol. And on the other end, Collecta uses XMPP to push all search results down to the user. If you've just searched on Barack Obama and new Barack content hits Collecta's servers, additional links will automatically appear in your browser - without a refresh. 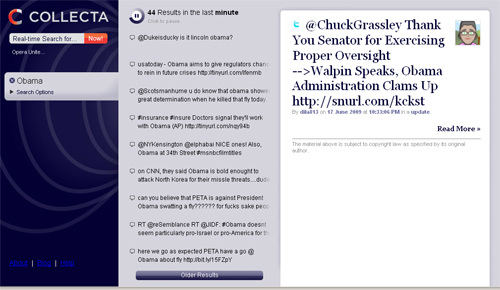 Like Twitter's search engine, Collecta doesn't even attempt to rank results according to Google-style relevancy. All searched results are listed according to the date and time they hit the web - and that's it.

"We're throwing aside the common conception of what search is all about, that it's about gathering links, creating an index, doing link analysis, and applying a ranking algorithm to show users results," Campbell says. "That's useful, but you can't watch things unfold in real-time. That's what we're exposing to people."

OK. Fine. But we can report that before today's planned launch the Collecta beta had consistent problems connecting back to the company's servers. At one point the evening before, the site was completely unreachable. And even when it was reachable, performance was spotty.

Despite this - and despite XMPP's relative lack of uptake - Collecta's chief technology officer, Jack Moffitt, is optimistic. Moffitt sits on the board of directors of the XMPP Standards and Xiph.org Foundations, and he has a long history with open-standards and open-source development. WordPress added XMPP at Collecta's request but Moffitt argues that more publishers will soon follow suit, putting even more "real" in the company's real-time search.

"We're talking to more and more people about getting XMPP set up," Moffitt tells us. "And content publishers are pretty interested. Something like RSS is pretty expensive. What you end up with is a situation like Twitter where they get billions of requests a day where they just say: 'No there's nothing now.' They can avoid all of that." ®