People just not that into Blu-ray

I'd rather be surfing

Winning the next-gen DVD format war turns out to be a bit like getting crowned "most popular stench." Blu-Ray may have overwhelmed the competition, but that doesn't mean folks plan to invite it into their home.

Although nearly half of Americans now own a high definition television, the overwhelming majority show little interest in owning a Blu-Ray player, according to Harris Interactive survey released Friday.

Out of 2,401 US adults polled online in April, about 93 per cent said they are unlikely to buy a Blu-ray player within the next year. That's up from 91 per cent who said they were unlikely to buy Blu-Ray within a year back in 2008. (Taking into account that people who purchased a player last year no longer have a reason to buy a second one, we'd call that figure a draw).

The Blu-Ray response is still wildly out of whack with Harris' count of US HD television adoption. The pollster says 47 per cent of American consumers report having a high definition television, up from 35 per cent last year.

So why the increased apathy for the high-def DVD format despite more folks owning high-def television? According to Harris senior consultant Milton Ellis, folks would rather forsake the disc format altogether in favor of alternative media. 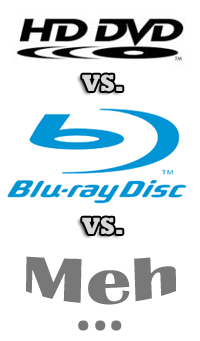 Oddly enough, although HD DVD is technically a dead format, it's apparently doing better than Blu-ray amongst those polled. About 11 per cent said they owned a HD DVD player, while 7 per cent said they own a Blu-ray player. (Both amounts are almost definitely inflated from the average US population due to Harris conducting the survey through an online poll). About 3 per cent get their HD DVD through the external drive for the Xbox 360, while 9 per cent do Blu-Ray by way of the Playstation 3.

Ownership of both high definition players is still up from 2008 — just not by much. Blue ray ownership was at about 6 per cent in 2008, while HD DVD was at about 4 per cent last year.

The format doesn't seem to be winning over its current owners either, according to the survey.

When Blu-ray player or PS3 owners were asked if they plan on switching their disc library completely, only about 25 per cent answered yes. And only around one third said they now make most of their movie purchases on the Blu-ray format. Meanwhile, about two in five said they're waiting for Blu-ray disc prices to go down.

A further breakdown of the Blu-ray survey is available here (as a PDF). ®