Next meeting won't be so friendly

NASA's new lunar probe beamed home images from the far side of the moon early Tuesday as the spacecraft eased into position for slamming down on the surface this October.

The $79m Lunar Crater Observation and Sensing Satellite (LCROSS) lifted off on June 18 along with its sister spacecraft, the $504m Lunar Reconnaissance Orbiter (LRO). The two spacecraft separated shortly after launch.

This morning's 1-hour swing-by put LCROSS about 1,988 miles (3,200km) from the moon's surface and gave NASA boffins their chance to calibrate the spacecraft's cameras and spectrometers. LCROSS is now in an elongated polar Earth orbit that won't get it up close and personal with the moon until the day of impact, October 9. 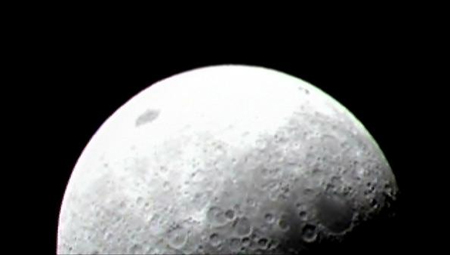 Attached to the Atlas V's empty Centaur rocket upper stage, LCROSS will spend the downtime being prepped for the "heavy impactor" mission. NASA predicts the impact will create debris plumes that will be analyzed for the presence of water ice, water vapor, hydrocarbons, and other materials.

"The successful completion of the LCROSS swingby proves the science instruments are functioning as expected. It is a testament to the hard work and dedication of the entire team" said Dan Andrews, LCROSS project manager at NASA's Ames Research Center in California "We are elated at the results from the maneuver and eagerly anticipate the impacts in early October."

LCROSS's instruments were tuned and calibrated by scanning three sites on the lunar surface; the craters Mendeleev, Goddard C and Giordano Bruno. The spots were selected because they offer a variety of terrain types, compositions and illumination conditions, NASA said. The spacecraft also scanned the lunar horizon to confirm everything was properly aligned to capture the Centaur's debris plume when it collides on the lunar surface shortly before the craft comes crashing down as well.

Meanwhile, LRO is set into orbit with the moon to begin its far-less suicidal mission of mapping out surface for potential landing sites, "potential resources," to characterize the radiation environment, and to test out all the cool devices NASA boffinry has devised since the agency's last unmanned lunar mission in 1998.

For lunar snoops at home, LCROSS's lunar swing-by provided live video stream coverage at about 2:20 pm GMT (6:20 am PDT). NASA says to check here for video playback later (once they finish editing out the Lizardman moon base, we're sure.) Also check out the LCROSS Twitter feed for NASA's bleeding-edge updates on the mission. ®