Review Nokia's flagship phone for 2009, the N97 has set sail – backed by marketing expenditure the size of an African nation's health budget. But it's barely got out of port before hitting stormy waters. Some of the disappointment expressed on the web – from phone fan sites and bloggers – is fair; some of it is baffling, but much of it is self-inflicted. Nokia has hyped the N97 intensely, even pitching it head-to-head against Apple's iPhone 3G S, with identical UK launch times. 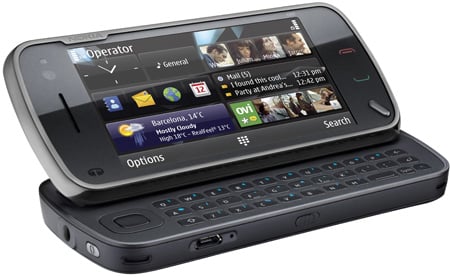 After putting the N97 through a range of practical, real-world situations, the controversy looks a little paradoxical. The N97 is, indeed, flawed in parts, with a UI chosen through necessity that, painfully, lacks the sheen and lustre of today's top-of-the-range smartphones. Yet, like the Mondeo, it nevertheless does a commendable job at what's asked of it. You can do a lot worse in the £30-£40 monthly contract price range than the N97.

Nevertheless, it's expensive and currently, quite buggy – waiting for firmware updates is recommended. So why the fuss? The N97 is the first Nokia touchscreen device with a full Qwerty keyboard to reach the market. Six years ago Nokia abandoned what would have been its first touchscreen Qwerty Communicator, based on the Hildon UI, just before launch. This appeared as the short-lived ‘Series 90’ UI, which shipped in just one phone, but is now better known as the user interface for the Nokia Internet Tablet series.

Nokia's refusal to use touchscreens even obliged it to rebrand a device from a rival – the Ben Q P31, for the Asian market. The hardware design is borrowed from Asian manufacturers, such as HTC. As Nokia added layers of bureaucracy to its smartphone team, and went through endless corporation re-organisations, rivals stole the laurels.

The N97 is really little more than a 5800 phone with a slide out keyboard, a revised home screen and other software tweaks. It delivers exactly what you would expect from that combination – and would sit comfortably at the high end of the midrange on today's market.

While the on-board storage provided is very generous, the amount of working memory isn't, leading to occasional problems. With 32GB of Flash built in, the N97 provides the most storage for music or videos of any phone on the market; Apple demands over £500 for a new, 32GB iPhone 3G S. However, you can add a microSDHC card to the N97 to expand that by a further 16GB. On the other hand, the working RAM available to applications is stingy.