It's three years since I experienced low memory dialog boxes on a Symbian phone. The '38MB free' when supplied soon fell alarmingly through the 20s, and by Day Three was around 17MB - despite an empty inbox. Less technically proficient users who accidentally instal applications on the C: drive – which is the default Nokia offers you – will run into problems sooner. The phone should follow the de facto default behaviour of closing down applications to free memory – an annoyance of a different sort – but I was able to run the browser and a major application concurrently. 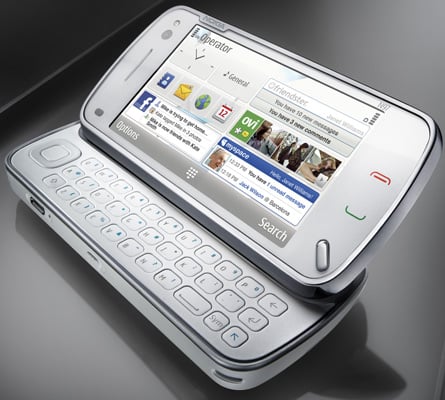 You shouldn't take anyone's word about the physical keyboard. Not even mine. Allied to a confusing and eccentric touchscreen handwriting implementation, it makes text input sub-optimal. Ideally, prospective purchasers should try and spend some time with it before deciding. After a week, I still couldn't get on with it.

Like the 5800, the N97 features a resistive screen, which was state-of-the-art until the appearance of Apple's iPhone, with its beautiful glass capacitive screen. This year's high end devices – the Palm Pre, the Samsung Omnia HD, and Vodafone's HTC Magic Android – all feature capacitive screens too. The resistive screen now feels cheap by comparison. In darkness, I found the display was pinsharp and rich but, outdoors on a muggy London June day, the screen was a near washout.

On the plus side, the stylus that's included in the box is never needed in practice, thanks to the Qwerty keyboard. It's there as an option if you want to use the handwriting recognition – one of four input methods supported by the N97, or five if you count voice control. In fact, pursuing the stylus/handwriting route opens a Pandora's box – you really don't want to go there. Leave the stylish pointer, which resembles the nib of a Magic Marker pen, in the box. There's no room for it in the housing of the phone anyway.

Charging and data transfer are both handled by micro USB. Nokia ships an adapter in the box, which can connect one Nokia’s traditional or thin pin chargers. This adapter gets pretty hot during charging and only works with the lead supplied with the N97 itself, a micro USB cable from a Xenon-tastic 6220 classic didn't charge the new device. There's no TV-out cable, which is a pity. But ... Hallelujah! Nokia finally makes a phone with a 3.5mm audio adapter - that's the right way up, on top of the device. 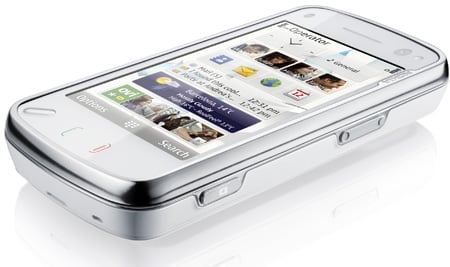 Adopt your position: open or closed – that's it

The build quality of the chassis is excellent. The screen slides smoothly and firmly up to a 30-degree angle, thanks to a sophisticated hinge mechanism, effectively giving it a built-in desk stand. This proved to be useful, particularly when viewing the BBC iPlayer. Unlike the E90, or some HTC devices including the new Touch Pro2, there are no intermediate positions between fully open and fully closed.