Information wants to be stolen

WiReD magazine Editor-in-Chief Chris Anderson has copped to lifting chunks of material for his second book Free from Wikipedia and other sources without credit. But it could be about to get a lot worse.

In addition to the Wikipedia cut'n'pastes, Anderson appears to have lifted passages from several other texts too. And in a quite surreal twist, we discover that the Long Tail author had left a hard drive backup wide open and unsecured for Google to index, then accused one of his accusers of "hacking".

Does the WiReD editor and New Economy guru need basic lessons in how to use a computer?

Waldo Jaquith of Virginia Quarterly Review unearthed a dozen suspect passages after what he called "a cursory investigation", and posted his findings here on Tuesday. Wikipedia entries for 'There Ain't No Such Thing as a Free Lunch', 'Learning Curve' and 'Usury' had been pasted into Anderson's book.

In addition to Wikipedia citations, which Anderson reproduced with the errors intact (oops), Jacquith suggests he also lifted from an essay and a recent book. Presented with the evidence, Anderson blamed haste and (curiously) not being able to decide on a presentation format for citations, for his decision to omit the citations altogether. Other examples were "writethroughs", he said.

Then lit blogger Edward Champion documented several more examples which he says show "a troubling habit of mentioning a book or an author and using this as an excuse to reproduce the content with very few changes — in some cases, nearly verbatim." Champion's examples of churnalism include blog posts, a corporate websites and (again) Wikipedia.

In a memorable exchange with the humourless [*] Anderson, Champion responded:

"Even accounting for the fool’s weight that Wikipedia has in even the most generalized research situation, surely an 'according to Wikipedia' would have solved the problem. Except that if you actually copped to the fact that you cadged from Wikipedia, you’d be a laughing stock, wouldn’t you? Your 'expertise' — that country bumpkin approach to slinging conceptual generalizations around — would be called into question, wouldn’t it?".

The bit in [our] italics is an early candidate for Quote of the Year.

Champion also discovered that Anderson had shared a backup of his personal hard drive with the entire universe. Anderson said he'd accidentally left the password off the backup, and then accused Champion of depositing files on the hard drive. Paging tech support for Mr Anderson...

And the rest of the iceberg has yet to be measured. One correspondent noted yesterday that in The Long Fail, Anderson's first hit, Anderson describes a walk he supposedly took around a Wal-Mart in Oakland, where "There are no copies of the Rolling Stones' Exile on Main Street or Nirvana's Nevermind".

This bears a remarkable resemblance to a 2004 article in Rolling Stone magazine by Warren Cohen, who says: "At a Wal-Mart Supercenter in Thorton, Colorado, for example, there were no copies of the Rolling Stones' Exile on Main Street or Nirvana's Nevermind."

The papers have been having great fun with the story, which has gained legs because of Anderson's dog-ate-my-footnotes defence. But maybe they shouldn't cast the first stone. 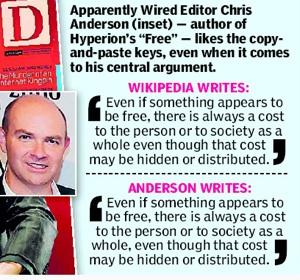 As we first reported, almost all the British obituary pages fell for the odd fact that Ronnie Hazlehurst had come out of retirement with S Club 7. Tabloid factoids spill from the web straight into print.

And last month an Irish prankster made up quotes for robo-repeaters at the BBC, the Graun, and the Independent (amongst others) to recycle. Newspapers blame the web for their demise, while churning out a crappy version of it in print.

And Anderson's lame thesis (The Long Tail is now thoroughly shot to pieces, while Free is hedged with qualifications) wouldn't have got out of the door if the papers had treated them with critical thinking, rather than slack-jawed wonder.®