NASA has published an impressive snap of the recent eruption of the Sarychev Peak volcano, captured by the crew of the International Space Station: 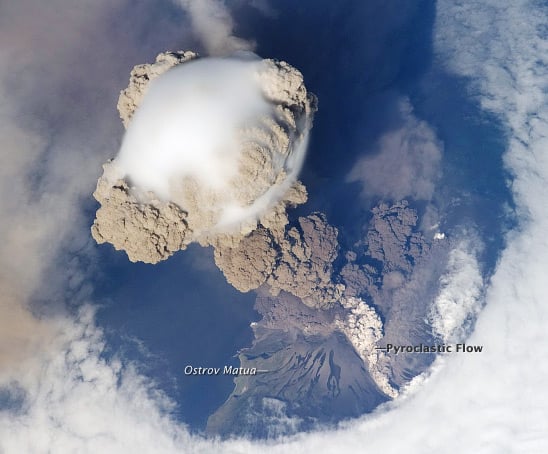 The volcano, which lies in the Kuril Island chain northeast of Japan, blew its top on 12 June, an event captured during a "fortuitous orbit" of the ISS. NASA explains that the picture is of particular interest to vulcanologists because it show "several phenomena that occur during the earliest stages of an explosive volcanic eruption".

These include the main plume, which "appears to be a combination of brown ash and white steam" and a clear circle in the "cloud deck" - either caused by "the shockwave from the eruption or from sinking air around the eruption plume".

Also on show is what's probably pyroclastic flow, which "appears to be hugging the ground, descending from the volcano summit".

The image was taken on a Nikon D2XS sporting a 400 mm lens, NASA notes. It has been "cropped and enhanced to improve contrast" and lens artefacts removed. ®