Faster and cheaper - whatever next?

Review The recent rapid evolution of Apple’s laptop range continues apace this month, with changes to virtually every model. The 15in MacBook Pro – or, to be precise, the 15.4in MacBook Pro – received a major update back in October when Apple introduced its new ‘unibody’ aluminium design, so we weren’t expecting anything other than the occasional speed-bump in the immediate future. However, there’s more to this latest model than a simple tweak to the processor speed. 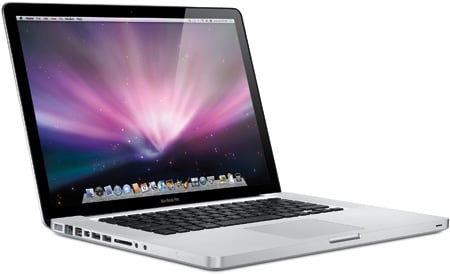 The previous model was available in two main configurations, costing £1399 with a 2.4GHz Intel Core 2 Duo processor, 2GB RAM, and 250GB hard disk, or a rather hefty £1749 with 2.53GHz processor, 4Gb RAM and 320GB hard disk. The 2.4GHz model has now been dropped altogether, while the price of the 2.53GHz model has been slashed to £1299 – although the hard disk on that model has been cut to 250GB and it has just a GeForce 9400M graphics processor, rather than the twin graphics processors found in the other 15” models.

It’s good to see that Apple has paid attention to the reviews – including ours – that commented on the rising prices of the new models that were introduced in October. Mind you, anyone that paid £1739 for the 2.53GHz model in October will probably be spitting blood right now.

As expected, our Mac benchmarking tests show that this model is about 10 per cent faster than its predecessor, making it the fastest Mac laptop we’ve reviewed to date. Like its predecessor, this model is also equipped with two separate graphics processors. For routine computing tasks there’s an integrated GeForce 9400M, or you can switch to a more powerful – and power-hungry – 9600M GT for games and other graphics-intensive tasks.

Closed system: the built-in battery can't be swapped out

The 9600M GT produces good performance, hitting almost 120fps in Doom 3, although the 63fps that we got from the less-powerful 9400M wasn’t bad either. To really put the machine through its paces we decided to use the Mac’s Boot Camp feature to instal Windows Vista and run a few PC benchmarks as well.